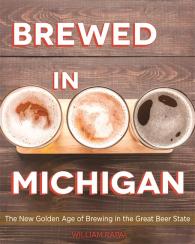 The New Golden Age of Brewing in the Great Beer State

Brewed in Michigan: The New Golden Age of Brewing in the Great Beer State is William Rapai’s "Ode on a Grecian Urn"—a discussion of art and art’s audience. The art in this case is beer. Craft beer. Michigan craft beer, to be exact. Like the Great Lakes and the automobile, beer has become a part of Michigan’s identity. In 2016, Michigan ranked fifth in the number of craft breweries in the nation and tenth in the nation in craft beer production. Craft brewing now contributes more than $1.8 billion annually to the state’s economy and is proving to be an economic catalyst, helping to revive declining cities and invigorate neighborhoods.

This book is not a beer-tasting guide. Instead, Rapai aims to highlight the unique forces behind and exceptional attributes of the leading craft breweries in Michigan. Through a series of interviews with brewmasters over an eighteenth-month sojourn to microbreweries around the state, the author argues that Michigan craft beer is brewed by individuals with a passion for excellence who refuse to be process drones. It is brewed by people who have created a culture that values quality over quantity and measures tradition and innovation in equal parts. Similarly, the taprooms associated with these craft breweries have become a conduit for conversation—places for people to gather and discuss current events, raise money for charities, and search for ways to improve their communities. They’re places where strangers become friends, friends fall in love, and lovers get married. These brewpubs and taprooms are an example in resourcefulness—renovating old churches and abandoned auto dealerships in Michigan’s biggest cities, tiny suburbs, working-class neighborhoods, and farm towns. Beer, as it turns out, can be the lifeblood of a community.

Brewed in Michigan is a book for beer enthusiasts and for people who want a better understanding of what makes Michigan beer special. Cheers!

William Rapai lives in Grosse Pointe, Michigan and is the author of two other books: Lake Invaders: Invasive Species and the Battle for the Future of the Great Lakes (Wayne State University Press, 2016) and The Kirtland’s Warbler: The Story of a Bird's Fight Against Extinction and the People Who Saved it.

Brewed in Michigan is an outstanding example of all the good that comes from beer. Beyond the tours of breweries selected from around the state and the entrepreneurial personalities behind them is a story of industry rebirth and community redevelopment. Beer enthusiasts throughout Michigan and beyond will enjoy this quick, easy read about Michigan’s newest and most successful industry. This is a pure Michigan story that will also be of great interest to researchers, community leaders, and politicians wishing to tap into what makes Michigan the great beer state.

Kudos to Mr. Rapai for capturing the history and individual stories of the craft beer industry in Michigan. Equally impressive is his recognition of the important but lesser-known pioneers like Ben Edwards and Tom Burns.

Brewed in Michigan is certainly the most comprehensive study yet of the crucible that is Michigan craft brewing. Bill Rapai’s book incisively captures the collaborative passion and philosophy we brewers share, as well as the diversity of our no-longer-fledgling craft beer movement. He lends real insight into the big question: ‘Why Michigan beer?’

– Ted Badgerow, founder of The Real Ale Company and head brewer/owner of the Ypsi Alehouse

A must-have for any Michigan beer lover, Rapai takes the armchair reader on a trip to many of the state's top breweries from such early pioneers as Bell's and Motor City on up to the new kids on the block, like Stormcloud and Cheboygan Brewing. This is not a volume of beer tasting notes, but interesting histories, informational morsels, and insightful interviews with the brewers.

Whether you're from the Great Lakes region or you've never set foot on Michigan soil, you'll enjoy this book for the way it gets to the heart of the craft brewing industry and how breweries become part of the local fabric they were stitched from. The land of Founders KBS and Bell's Two-Hearted Ale is a microcosm of the craft brewing scene around the country, and Brewed in Michigan is a worthy read wherever you call home.