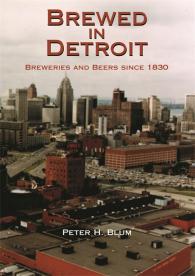 Breweries and Beers Since 1830

Peter Blum's long association with Stroh, his academic training in brewing chemistry and his unparalleled scholarly interest in the history of Michigan brewing all combine to make him uniquely qualified to produce the definitive work on Detroit breweries.

Brewed in Detroit describes the history of the brewing industry in the Detroit metropolitan area (including Ann Arbor, Mt. Clemens, Pontiac, Windsor, Wyandotte, and Ypsilanti) from its beginning in the 1830s to the present revival by microbrewers and brewpubs.

A historian and trained veteran of the brewing industry, Peter H. Blum divides Detroit brewing history into seven distinct phases: the early Anglo-Saxon ale brewers, the German brewers who arrived after 1848, the rise of brewing dynasties in the 1880s, Prohibition, the return of beer in the era after repeal in 1933, the war years, and the postwar competition.

Each brewery's story is told in terms of the individuals and families who started the enterprise, and chronicles their fortunes and failures. The book concludes with a compilation of every brewery in Detroit of which there is a record, brand names of all beers and ales marketed in Detroit, production figures of all Detroit breweries since 1933, a glossary of technical terms, and an index.

Peter H. Blum retired from the Stroh Brewery Company, Detroit, in 1989 after nineteen years in the brewing development. After his retirement, the Stroh family appointed him archivist in order to maintain the heritage of the family-owned enterprise.

Peter Blum's long association with Stroh, his academic training in brewing chemistry and his unparalleled scholarly interest in the history of Michigan brewing all combine to make him uniquely qualified to produce the definitive work on Detroit breweries.

10 hours 7 min ago
In honor of the #CityofDetroit turning 321 years old on July 24th, WSUPress will be showcasing one Detroit Book of… https://t.co/PA7nONh4C0
15 hours 10 min ago
OUR FALL & WINTER 2022 TITLES ARE NOW AVAILABLE FOR PRE-ORDER! Grab your copy of any of our fall & winter titles f… https://t.co/qDykAsF9sk
2 days 16 hours ago
Happy Pub Date to THE SPOOK WHO SAT BY THE DOOR, SECOND EDITION! This new edition of a literary classic now includ… https://t.co/XrCsLZvf4D