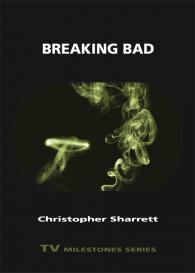 Breaking Bad (2008–2013), a remarkable synthesis of the crime film, the sitcom, the western, and the family melodrama, is a foundational example of new television in the early twenty-first century. Receiving multiple Emmy Awards, it launched the careers of its creators and stars, most notably Bryan Cranston as high school teacher turned drug manufacturer Walter White, whose attempt to grab the American dream results in the destruction of family, home, community, and himself. In this book, Christopher Sharrett examines the innovations of Breaking Bad through a study of its main character, using psychoanalysis, genre study, gender studies, American studies, and the graphic arts to assist an exploration of the supreme danger of modern, postindustrial toxic masculinity embodied in Walter White.

Serving as a fresh start for the American Movie Classics (AMC) cable outlet, Breaking Bad is probably the most uncompromised rendering of the white American male’s rage in early twenty-first-century fiction. Set against a deindustrialized American landscape, its conflicted morality can seem less ambiguous than repugnant when we note the use of humor throughout, particularly as characters are introduced and killed off. Walter’s relationships with his son, who has cerebral palsy, his former student turned business partner, his long-suffering wife, and his DEA brother-in-law are layered on top of the show’s reflection of the very real challenges facing America today, which are not limited to the opioid epidemic, lax gun laws, and racial violence.

Some critics have accused Breaking Bad of inciting a disturbance rather than criticizing, as it relies heavily on the audience’s humor. Sharrett’s argument for why the show is the canniest dramatic insight of our times is worth the price of admission for scholars and students of media studies and superfans alike.

In this compelling volume, one of the sharpest readers of film writing today applies his skills to one of the greatest television series of all time. Sharrett even dares to read Breaking Bad against its fans. Going beyond simple celebration, he argues that the series subversively critiques the foundational values and institutions of modern-day USA: patriarchy, race, class, and the family itself. As Breaking Bad reveals, the Wild West is still with us.

Never buying into the easy clichés of either fannish praise or academic jargon, Christopher Sharrett cuts right to the heart of what makes Breaking Bad a vital cultural landmark of the twenty-first century, as well as moving and exciting television. This book is an absorbing critique of ‘male persona and social decay.’

Breaking Bad broke explosive new ground as a genre-blending crime drama with a strong sociopolitical edge. Christopher Sharrett’s incisive study is as stimulating and provocative as the show itself, analyzing its remarkable entertainment value while teasing out its multifaceted subtextual design. Readers will enjoy the drug-free excitements of first-rate scholarship.

– David Sterritt, editor in chief of Quarterly Review of Film and Video and author of The Honeymooners (Wayne State University Press, 2009)

Sharrett perceptively cracks open America’s darkest ideological assumptions. His definitive study reveals Walter White as a man who weaponizes contempt for the very family he claims to protect. Embracing his masculine inner rage, White becomes one with it as surely as if it were a vat of hydrofluoric acid.