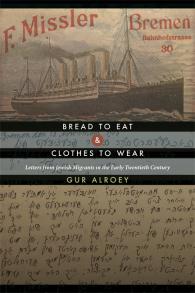 This volume will find a special place on the book shelves of all those engaged with the Jewish migration experience.