Home » Books » From Bourgeois to Boojie 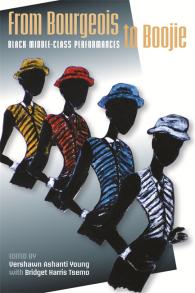 From Bourgeois to Boojie

Innovative in its juxtaposition of critical essays and creative texts, notable for its inclusion of such significant voices in African American literature as Houston A. Baker and Amiri Baraka, this volume very productively engages the question of what constitutes black bourgeois performances in the post-civil rights era. The editors have assembled an exciting and important collection.

In From Bourgeois to Boojie: Black Middle-Class Performances, editor Vershawn Ashanti Young and assistant editor Bridget Harris Tsemo collect a diverse assortment of pieces that examine the generational shift in the perception of the black middle class, from the serious moniker of "bourgeois" to the more playful, sardonic "boojie." Including such senior cultural workers as Amiri Baraka and Houston Baker, as well as younger scholars like Damion Waymer and Candice Jenkins, this significant collection contains essays, poems, visual art, and short stories that examine the complex web of representations that define the contemporary black middle class.

Young opens the book with a critical introduction that looks at the articulation of class and race as a mode of performing U.S. citizenship. In four thematic parts-Performing Responsibility, Performing Womanhood, Performing Media, and Performing Sexuality-contributors explore different aspects of middle-class blackness. Acknowledging that the black middle class could never be depicted satisfactorily by one genre or from one perspective, contributors include pieces as varied as drawings by Iowa artist Jean Berry; self-reflexive commentaries from cultural critics Bryant Keith Alexander, Houston Baker, Dwight McBride, and Greg Tate; a short story by novelist Venise Berry; and cultural critiques by scholars Harilaos Stecopoulos and Angela Nelson. The volume also contains a thoughtful foreword by performance artist and scholar E. Patrick Johnson and an astute afterword by sociologist Mary Pattillo.

The journey from bourgeois to boojie embraces the long journey of African Americans from the cotton field and the assembly line to the corporate conference table and the White House. This insightful and diverse volume will be relevant to scholars of performance studies, African American studies, American literature, performative writing, and sociology, as well as creative writers and those interested in contemporary political discourse on race.

Vershawn Ashanti Young is a performance artist, actor, and associate professor of African American studies, English, and performance studies at the University of Kentucky. He is the author of Your Average Nigga: Performing Race, Literacy, and Masculinity (Wayne State University Press, 2007) and co-editor of the forthcoming Code Meshing as World English: Policy, Pedagogy, Performance.

From Bourgeois to Boojie dismantles the hegemonic 'master' narratives that seek to silence, stifle, and then sentence us to embody the mythic performances of a colorblind and classless America. I can't wait to engage this work with colleagues and students."

Based on the compelling assumption that identity is performative, Vershawn Ashanti Young collects and astutely frames original, cogent examinations of sites where nostalgia for two cherished American essentialisms-race and middleclassdom-collide. Rich in scope and insight, From Bourgeois to Boojie is important, timely, and provocative."

Using E. Franklin Frazier's now classic 1957 Black Bourgeoisie as a starting point, From Bourgeois to Boojie insightfully analyzes the cultural and identity politics of the contemporary black middle class. Innovative in its juxtaposition of critical essays and creative texts, notable for its inclusion of such significant voices in African American literature as Houston A. Baker and Amiri Baraka, this volume very productively engages the question of what constitutes black bourgeois performances in the post–civil rights era. The editors have assembled an exciting and important collection."

The timing of this collection could not be better; the historic election of Barack Obama as the first black American president of the United States offers the first sustained public examination of black middle-class life since the era that produced The Cosby Show. As such, this volume offers an opportunity to put black middle class experiences into a broad historical context, while also indexing the realities of black middle class life in the mid-1980s."

17 hours 15 min ago
Wayne State University Press is proud to announce our winner and finalists of the 2022 Next Generation Indie Book A… https://t.co/Ozy1WEQY1i
1 day 22 hours ago
Congratulations to all of the winners! https://t.co/Em8m5qoESk https://t.co/0EX9yD1vge
2 days 22 hours ago
RT @muckrack: Today's featured journalist is @fkwang, Communities Correspondent at @NewsHour. Based in Detroit, Frances covers As… https://t.co/XK9qCAOXhS