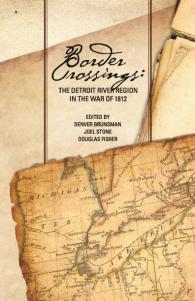 The Detroit River Region in the War of 1812

After the American Revolution, the Detroit River marked the boundary between the American frontier outpost of Detroit and the British Canadian communities of Sandwich (present-day Windsor, Ontario) and Fort Amherstburg. For more than a generation, American citizens, British subjects, French settlers, Native Americans, and African slaves and freedmen routinely crossed the border while living and working together in one of the most diverse regions in North America. That tranquility ended suddenly with the War of 1812. Cross-river neighbors transformed into enemies as the previously ignored border became fraught with new political significance.

The result of a year-long community history partnership between the Detroit Historical Society and Wayne State University, Border Crossings uncovers the personal and group interactions often ignored in standard histories of the War of 1812. In August 1812, U.S. General William Hull surrendered Detroit to the British under General Isaac Brock. For more than a year, until September 1813, Detroit remained in the hands of the British. Americans then occupied settlements on the Canadian side of the Detroit River until July 1815-well past the official end of the war. These multiple "border crossings" had profound implications for the diverse inhabitants of the Detroit River region, including widespread privation, imprisonment, enemy attacks, and dispossession of homes and land.

Denver Brunsman, formerly of Wayne State University, is an assistant professor of history at The George Washington University.

Joel Stone is the Senior Curator with the Detroit Historical Society.

Douglas Fisher is managing editor with Crain Communications Inc. in Detroit. Fisher is co-editor, with Stone and Brunsman, of Revolutionary Detroit: Portraits in Political and Cultural Change (Detroit Historical Society, 2009).

By highlighting the everyday experiences of ordinary people living in the region at the time, this compilation of 21 essays aims to provide a more thorough understanding of the communities that went from cross-river neighbors to enemies during this significant time in our history.

1 day 4 hours ago
In THE ENCHANTED BOOT, Nancy L. Canepa encourages a revisitation of the fairy-tale canon with this fascinating anth… https://t.co/qzfMsEAyvv
2 days 5 hours ago
FEARLESS VULGARITY by Ken Feil discusses "Valley of the Dolls" author Jacqueline Susann’s camp comedy and legacy.… https://t.co/XLUcIGCyWD
2 days 6 hours ago
RT @WSUHumClinic: Stay informed on what's new and next from the @WSUPress... Nothing Special by Desiree Cooper (available this Oct.)… https://t.co/0zNnngDSS1