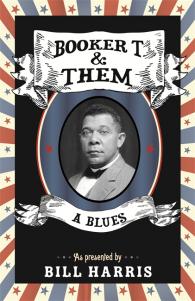 As Presented by Bill Harris

Everyone who cares about justice should read this marvelously written book.

The early 1900s was a dangerous time for African American men, whether famous or nameless. Punishment from any perceived transgression against the Jim Crow power structure came swiftly in legislative, emotional, or physical form, and it could well take one’s life. Despite this reality, however, a number of African Americans still lifted their heads, straightened their spines, and spoke and acted against the mainstream. In Booker T. & Them: A Blues, poet and playwright Bill Harris examines what he calls "the age of Booker T." (1900–1915), when America began flexing its imperialistic muscles, D. W. Griffith’s Birth of a Nation was released, and Thomas Edison’s many technological innovations set the tone for the United States to be viewed as the nation of the century.

In the historical and imaginative narrative of this "bio-poem," Harris considers several African Americans who sought to be men that mattered in a racist America, including Booker T. Washington, W. E. B. DuBois, William Monroe Trotter, George Washington Carver, and Jack Johnson, as he traces their effects on history and each other. In tandem, he visits white historical figures like Thomas Edison, Theodore Roosevelt, and D. W. Griffiths as well as some invented characters like students and professors at the Tuskegee Institute. Throughout, Harris shows that the rapid pace of early twentieth-century American change, progress, and science coincided with persistent and reinvented forms of white supremacy. Harris’s exciting structure offers varied rhythms and a blues sensibility that showcases his witty lines and vivid imagery.

As a follow-up to his 2009 work Birth of a Notion; Or, the Half Ain’t Never Been Told, this book extends Harris’s critical and experimental examination of American history by presenting evidence for a greater understanding of these men and the cultural forces that shaped them. Readers interested in African American studies, American culture, and contemporary poetry will appreciate the unique perspective of Booker T. & Them: A Blues.

Bill Harris retired as professor of English at Wayne State University in 2011 and is author of numerous plays, including Robert Johnson Trick the Devil, Stories About the Old Days, Riffs, and Coda. He is the author of three books of poetry, Birth of a Notion; Or, the Half Ain’t Never Been Told (Wayne State University Press, 2009), The Ringmaster’s Array, and Yardbird Suite: Side One, which won the 1997 Naomi Long Madgett Poetry Award. Harris was named the 2011 Kresge Eminent Artist by the Kresge Foundation in recognition of his professional accomplishments and community engagement.

Bill Harris is brilliant. Very few writers can synthesize an era of history, features of its epoch making events, the biographical details of figures from that era, and render them in an aesthetically sophisticated book-length prose poem or set of poems.

Booker T & Them, a bio-poem, traces the dank holes of Jim Crow during the early twentieth century while examining the psyche of men who donned masks of minstrelsy to survive its landmines. No ghosts here-just ancestors with grit and fortitude!"

The genius of Bill Harris has never been more evident than in Booker T & Them. This book is such a tightly woven fabric of history, biography, poetry, drama, song, sound, quotations, and definitions that the threads defy separation. We are taken on an unforgettable journey into the thoughts and experiences of Washington and some of his contemporaries-their public and their secret selves-as they battle racism and its apostles in various ways. Everyone who cares about justice should read this marvelously written book."