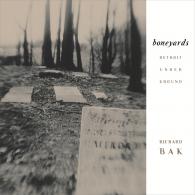 Rather than avoiding the unknown, Boneyards allows us to embrace it.

From the earliest burial mounds to today’s simple street shrines, Boneyards: Detroit Under Ground reveals how Metro Detroiters have interred their dead and honored their memory. Author Richard Bak investigates the history of dozens of local cemeteries and also explores the cultural and business side of dying, from old-fashioned home funerals to the grave-robbing "resurrectionists" of the nineteenth century to modern funeral directors. Bak presents a mix of historic and contemporary photographs to illustrate each site or event alongside lively prose descriptions. Taken together, Bak’s informative and often surprising historical snapshots span the entire metro area and three centuries of history.

Boneyards visits the area’s largest cemeteries—including Elmwood, Woodmere, Mount Olivet, Mount Elliott—and showcases some of their most intricate and unusual monuments. Bak also introduces readers to abandoned graveyards like William Ganong Cemetery in Westland, Millar Cemetery in Clinton Township, and Beth Olem Cemetery inside the GM Poletown Plant. Bak includes photos of some of the city’s largest funerals, from those of automaker Henry Ford and orchestra conductor Ossip Gabrilovitch to civil rights icon Rosa Parks and rapper DeShaun "Proof" Holton. In addition, Bak tells the stories of the ordinary and the unclaimed in local cemeteries, along with the social changes like the creation of a "drive-through" funeral home in the 1970s, the "white flight" of interred family members from Detroit cemeteries, and the trend of local cemeteries adding graves that face Mecca to accommodate the growing Muslim population.

Ultimately, Bak proves that our treatment of the dead reveals much about our culture and our values. Boneyards will be intriguing reading for Detroit historians, local residents, and anyone interested in the customs of memorializing past generations.

There's nothing macabre about this latest venture from the prolific Dearborn author, historian and journalist. Rather Boneyards, with its nearly 140 contemporary and historical photographs, is a thoughtful, intriguing look at how we in Metro Detroit care for our dead and honor their memories....Through Bak's lens, how we memorialize the deceased or how we neglect them reflects who we are as a society....Rather than avoiding the unknown, Boneyards allows us to embrace it.

It may seem a bit macabre to devote an entire volume to metro Detroit's cemeteries, funerals, and burial customs through the years, but Richard Bak's Boneyards avoids ghoulishness, treating death as a natural and inevitable component in the cycle of life. His tone is respectful, but an occasional irreverence leavens his otherwise gloomy-seeming subject. Numerous photographs, both vintage and contemporary, illuminate the text....Boneyards may be concerned with the dearly departed, but the book is not without relevance; a recurring theme in the book is this: How we treat the dead says volumes about the living.

Through 140 historic and contemporary photos, extensive historical records and his own illuminating-and at times chilling-prose, Bak offers a sweeping look at how we in southeastern Michigan care for the dead and honor their memory-or neglect it....Bak's prose reminds the reader that death is inextricably linked to life. His writing is what Thomas Lynch-the Milford undertaker and National Book Award finalist-might sound like if Lynch were a journalist with three decades of experience covering the grittier side of Detroit life.

It is to the camera especially that a debt is owed by the appreciative reader. Each black-and-white photo in Bak's book comes to the eye like a hushed whisper out of time; and unlike past books of a similar nature (Wisconsin Death Trip, for example), the reader is not subjected to a preordained 'thesis' about communal psychology or man's rabid obsesssion with dissolution. What the reader does get is history, anecdote, craftsmanship, poetry, humor(!), dignity and an impressive timeline with a roster of Detroit names both famous and unknown. Find us another work (on any subject) that puts Lewis Cass, St. Hedwig of Andechs, Joseph Campeau, the Dodge Brothers, the Purple Gang, Rosa Parks and 'Maserati Rick' between the same covers, and we'll give you a freshly carved pumpkin.

[A] captivating, thorough and inherently morbid look at death through a geographic prism. To be more exact, it's a meditation on death places....a solid look at Detroit and the Midwest through time, and Bak delightfully uses death as the thread to tie all these years together.

The prolific Richard Bak has written about most living subjects in southeastern Michigan, so now he has turned his attention to death. Boneyards: Detroit Under Ground is a fascinating look at how we have died in Detroit going back to 1701. With Bak's excellent research and writing, and numerous historic and contemporary photos, Boneyards is quirky, interesting, haunting and, yes, lively."

A book of surpassing beauty and importance, rich in history, humanity, and gravity-Boneyards: Detroit Under Ground is that rarest of things: a commingling of text and images, so finely wrought and perfectly realized that it produces a permanent gift and indispensable record."

– Thomas Lynch, author of The Undertaking and Apparition & Late Fictions

Boneyards is an intriguing look at the story of Detroit and its dead, making for an unusual and entertaining read.

Bak gives an intriguing look at life and, particularly, death in Detroit.

– The Past In Review

A reflective historical and photographic look back at burial and funeral customs, along with the famous and not-so-famous people whose tombstones can be found at cemeteries around Wayne, Oakland, and Macomb counties. . . With anecdotes about the people behind the headstones, Boneyards has a narrative as well as historical tone."

Rather than avoiding the unknown, Boneyards allows us to embrace it."

Its more than 200 pages of text and images take readers on a historical journey from early Native American burial mounds to contemporary street shrines, through cemeteries-including some in western Wayne County-into funeral homes and memorial services."

This work highlights the mournful spirit of Detroit throughout the years. The photographs are works of art in their own right, revering the dead through light, depth and shadow. The pictures capture how the buried deceased, or just the beauty of their graves, impacted those left behind, including the author. Boneyards will certainly allow readers to see how Detroiters have celebrated life through the dignity of death."

1 day 2 hours ago
RT @oneitadetroit: Thrilled to announce @WSUPress is releasing the 2E of Sam Greenlee's "The Spook Who Sat by the Door" on Tuesday. In… https://t.co/H7WrVLnlLw
2 days 3 hours ago
With just ONE WEEK left of #PrideMonth, make sure you grab your copy or e-book of any of our @queer_screens titles!… https://t.co/bDWFdJgo1S
3 days 1 hour ago
Now available as an e-book for the first time! https://t.co/l4kjSuHhCU