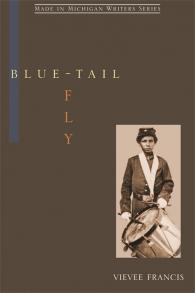 This is first-rate poetry; this is writing that cuts to the bone.

The title of Blue-Tail Fly comes from an antebellum song commonly known as "Jimmy Crack Corn." The blue-tail fly is a supposedly insignificant creature that bites the horse that bucks and kills the master. In this collection, poet Vievee Francis gives voice to "outsiders"—from soldiers and common folk to leading political figures—who play the role of the blue-tail fly in the period of American history between the Mexican American War and the Civil War. Through a diverse range of styles, characters, and emotions, Francis's poems consider the demands of war, protest and resistance to it, and the cross-cultural exchanges of wartime.

More than a narrowly themed text, Blue-Tail Fly is a book of balances, weighing the give-and-take of people and cultures in the arena of war. For lovers of poetry and those interested in American history, Blue-Tail Fly will illustrate the complexities of the American past and future.

Vievee Francis is a well-known poet in the Detroit area whose poems have appeared in numerous journals. This is her first full-length book of poetry.

Francis' debut book is Detroit's best-selling poetry collection of 2006. Her poems take the form of historical narratives of African American soldiers and 'outsiders' from the Mexican War to the Civil War."

Francis humanizes the plight of all who follow orders, demystifies the code of ethics of those who command both secular and spiritual armies, and balances the inequities of race as well as gender: all within the context of personal narratives played out on the larger canvas of American identity. Blue-Tail Fly is an enchanting effort, one that pro-vides a much-needed national framework for a greater understanding of reconciliation."

The great thing about Blue-Tail Fly is that it does not contain any filler; it is essential reading and an essential series of poems. In lines that respect the freedom and limitations of prosody, these poems at-tempt their own truth and invention, giving themselves away to the reading experience the way contemporary art should, as cultural power objects. This book is governed by the imagination's nation of historical control; it is an honest repair guide for everyone's American home."

This remarkable debut gives voice to the lives and the losses endured in the wake of U.S. imperialism, lives and losses that resonate to this day. And these eloquent, clear-eyed, compassionate poems inspire us, like the blue-tail fly, to continue our efforts to unseat the masters of war."

This is first-rate poetry; this is writing that cuts to the bone. Blue-Tail Fly, published by Wayne State University Press as part of the Made in Michigan Writers Series is an inspiring debut from a Detroit-area poet."

Blue-Tail Fly tells the stories of freed slaves, Vievee [Francis'] ancestors and Civil War soldiers. Now in its second printing, it was hailed as one of the best poetry books of 2006 by Poets & Writers magazine."

8 min 43 sec ago
TONIGHT! Join @stephanie_heit at @ShopBooksweet for local author's night! https://t.co/pTny5OErDe
21 hours 52 min ago
Have you had a chance to check out our new Spring & Summer 2023 Catalog?! From a new lyric essay collection to a p… https://t.co/cNAo9WjL9K
1 day 20 hours ago
RT @shondabuchanan: Tonight! Feb. 1, 2023, 6:30pm Mountain Time -- Virtual reading for #lewisandclarklibrary Lewis & Clark Library in H… https://t.co/UAmMoIlq1w