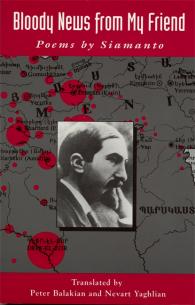 Bloody News from My Friend

Siamanto (1875-1915), one of the most important Armenian poets of the twentieth-century, was among the Armenian intellectuals executed by the Turkish government at the onset of the genocide during the first decade of the century. Available for the first time in English translation, his Bloody News from My Friend depicts the atrocities committed by the Ottoman Turkish government against its Armenian population.

The cycle of twelve poems bears the imprint of genocide in a language that is raw and blunt; it often eschews metaphor and symbol for more stark representation. Siamanto confronts pain, destruction, sadism, and torture as few modern poets have. Peter Balakian's critical introduction places Siamanto's poems in literary and historical context. The translation by Balakian and Nevart Yaghlian allows readers to hear Siamanto's startling and arresting voice in a fresh, vernacular language.

Prize-winning poet Peter Balakian is the author of four books of poems, most recently Dyer's Thistle, and a book on Theodore Roethke. He is co-editor of the poetry journal Graham House Review and a professor of English at Colgate University.

Nevart Yaghlian was born in Jerusalem and has taught at Haigazian College in Beirut. She was the director of counseling in the College of Human Ecology at Cornell University.