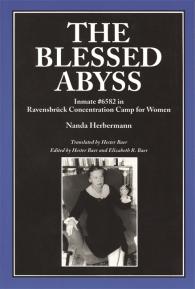 On February 4, 1941, Nanda Herbermann, a German Catholic writer and editor, was arrested by the Gestapo in Münster, Germany. Accused of collaboration with the Catholic movement, Herbermann was deported to Ravensbrück Concentration Camp for Women in July 1941 and later released upon direct orders from Heinrich Himmler on March 19, 1943. Although she was instructed by the Gestapo not to reveal information about the camp, Herbermann soon began to record her memories of her experiences. The Blessed Abyss was originally published in German under the imprint of the Allied occupation forces in 1946, and it now appears in English for the first time. Hester Baer and Elizabeth Baer include an extensive introduction that situates Herbermann's work within current debates about gender and the Holocaust and provides historical and biographical information about Herbermann, Ravensbrück, and the Third Reich.

Hester Baer recently recieved her Ph.D. in German from Washington State University and was awarded the Lisa Lee and Marc Ewing Postdoctoral Fellowship in German and Women’s Studies at Duke University.

Elizabeth R. Baer is a professor of English and holds an endowed chair in ethics at Gustavus Adolphus College. She is the editor of Shadows on My Heart: The Civil War Diary of Lucy Buck of Virginia, 1861-1865 (University of Georgia Press, 1997).

Elizabeth and Hester Baer show how valuable the gifts of expert translation, brilliant commentary, and careful annotation can be as they give new life to Nanda Herbermann's important but previously little-known 1946 memoir about her experience as a prisoner in Nazi Germany's concentration camp for women at Ravensbrück. Incisively analyzing Herbermann, a nationalistic German Catholic, the Baers helpfully probe the political ambiguities, religious questions, and gender issues embedded in their distant relative's narrative. . .

4 hours 20 min ago
Happy Pub Date to THE SPOOK WHO SAT BY THE DOOR, SECOND EDITION! This new edition of a literary classic now includ… https://t.co/XrCsLZvf4D
4 hours 24 min ago
RT @DarkProjections: Returned from a great two weeks in Europe to find copies of my new book! Kolchak:The Night Stalker, one of the Pion… https://t.co/kPJ5kKLRyr
1 day 1 hour ago
RT @oneitadetroit: Thrilled that @WSUPress is releasing the 2E of Sam Greenlee's "The Spook Who Sat by the Door" tomorrow. Introductio… https://t.co/hZpAjxluIl