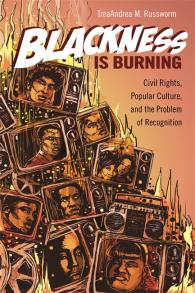 Civil Rights, Popular Culture, and the Problem of Recognition

Blackness Is Burning is one of the first books to examine the ways race and psychological rhetoric collided in the public and popular culture of the civil rights era. In analyzing a range of media forms, including Sidney Poitier’s popular films, black mother and daughter family melodramas, Bill Cosby’s comedy routine and cartoon Fat Albert, pulpy black pimp narratives, and several aspects of post–civil rights black/American culture, TreaAndrea M. Russworm identifies and problematizes the many ways in which psychoanalytic culture has functioned as a governing racial ideology that is built around a flawed understanding of trying to "recognize" the racial other as human.

The main argument of Blackness Is Burning is that humanizing, or trying to represent in narrative and popular culture that #BlackLivesMatter, has long been barely attainable and impossible to sustain cultural agenda. But Blackness Is Burning makes two additional interdisciplinary interventions: the book makes a historical and temporal intervention because Russworm is committed to showing the relationship between civil rights discourses on theories of recognition and how we continue to represent and talk about race today. The book also makes a formal intervention since the chapter-length case studies take seemingly banal popular forms seriously. She argues that the popular forms and disreputable works are integral parts of our shared cultural knowledge.

Blackness Is Burning’s interdisciplinary reach is what makes it a vital component to nearly any scholar’s library, particularly those with an interest in African American popular culture, film and media studies, or psychoanalytic theory.

TreaAndrea M. Russworm is an assistant professor of English at the University of Massachusetts, Amherst, where she teaches interdisciplinary classes on literature, popular culture, and new media. She is a co-editor of From Madea to Media Mogul: Theorizing Tyler Perry and her work has appeared in Game On, Hollywood! and Watching While Black.

Blackness is Burning is evidence that Russworm is an intellectual inferno.

In Blackness Is Burning, TreaAndrea Russworm skillfully repurposes psychoanalytic theory to explore notions of recognition of Blackness, which was key to the civil rights era (in media and in life), and continues to inform both Black and "mainstream" popular culture. Russworm’s prose is accessible and rigorous: her ability to convey and critique theoretical concepts within her analyses of Black media representations in a tangible, almost commonsense way, is immensely laudable—and no small feat.

Russworm’s meticulous application of a psychoanalytic frame creates profound new understandings of these and other texts across popular culture that promise to give them—and the scholarship around them— new life through her remarkable book.