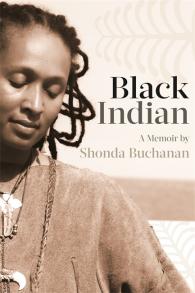 A Memoir by Shonda Buchanan

Black Indian, searing and raw, is Amy Tan’s The Joy Luck Club and Alice Walker’s The Color Purple meets Leslie Marmon Silko’s Ceremony—only, this isn’t fiction. Beautifully rendered and rippling with family dysfunction, secrets, deaths, alcoholism, and old resentments, Shonda Buchanan’s memoir is an inspiring story that explores her family’s legacy of being African Americans with American Indian roots and how they dealt with not just society’s ostracization but the consequences of this dual inheritance.

Buchanan was raised as a Black woman, who grew up hearing cherished stories of her multi-racial heritage, while simultaneously suffering from everything she (and the rest of her family) didn’t know. Tracing the arduous migration of Mixed Bloods, or Free People of Color, from the Southeast to the Midwest, Buchanan tells the story of her Michigan tribe—a comedic yet manically depressed family of fierce women, who were everything from caretakers and cornbread makers to poets and witches, and men who were either ignored, protected, imprisoned, or maimed—and how their lives collided over love, failure, fights, and prayer despite a stacked deck of challenges, including addiction and abuse. Ultimately, Buchanan’s nomadic people endured a collective identity crisis after years of constantly straddling two, then three, races. The physical, spiritual, and emotional displacement of American Indians who met and married Mixed or Black slaves and indentured servants at America’s early crossroads is where this powerful journey begins.

Black Indian doesn’t have answers, nor does it aim to represent every American’s multi-ethnic experience. Instead, it digs as far down into this one family’s history as it can go—sometimes, with a bit of discomfort. But every family has its own truth, and Buchanan’s search for hers will resonate with anyone who has wondered "maybe there’s more than what I’m being told."

In this important memoir, Black Indian, Shonda Buchanan explores a hidden tapestry of Americanness, as well as an inheritance of abuse and addiction. The family watcher, Buchanan confronts questions of identity and ancestry, asking every African American to consider the question of who we really are. Indeed, Buchanan circles through a host of issues revolving around the conundrum of growing up with multiple ethnic strands in a society that tries to box you in by race. This book will speak to anyone turning over stones to find lost grandparents and great grandparents, to mothers and daughters and sons and fathers, as well as to those determined to heal cycles of violence in their own families.

– Jeffery Renard Allen, author of the novels Song of the Shank and Rails Under My Back

Secrets have a tendency of dancing with silence. Shonda Buchanan’s journey to discover her roots, to learn her identity, is not another American story, it’s perhaps the first story. Black Indian acknowledges the past with all its implication of who we are as Americans. Our nation cannot walk a path of denial into the future. When we look into the mirror of history our features, our hair, and the essence of our blood and bone structure will provide us with the evidence and answers we’ve been waiting for. Shonda Buchanan has the courage to tell her story and the story of her family. Her story is our song. This book is muscle music. It can only make our nation stronger.

A poet and natural storyteller, Shonda Buchanan has crafted a rich memoir that chronicles the legacy of her ancestors, black Indians, or mixed-race peoples in America and throughout the African diaspora. While reading this memoir you witness the marginalization, invisibility, and scars left on the lives of black Indians. You understand the dream as a window into our fears, desires, and suppressed memories, and you are reminded of the complicated and blurred lines of race and ethnicity present in the lives of many people in the Americas. This is a memoir that will leave you thinking about the complex relationship of the black Indian to the peoples of this nation.

Too many people don’t know the trunk and branches of who they are. In America, this is intertwined with conquest, colonialism, racism, and slavery, as well as class exploitation. Shonda Buchanan personifies the long but hidden story of black Indians. As a Chicano, an indigenous man remade over by layers of genocide and erasure, I can relate to Shonda’s necessary and at times painful excavating of time, people, and place to illuminate her particular complexity and, in the process, enrich us all.

– Luis J. Rodriguez, author of Always Running, La Vida Loca, Gang Days in L.A., and It Calls You Back: An Odyssey Through Love, Addiction, Revolutions & Healing

Shonda Buchanan’s Black Indian is chock full with side-eyed women's voices singing Michigan history through blood quantum and bloodied fists. This is a midwestern testament with family as tattered, taped-up, and wrinkle-worn as all the sepia photos of proud, forgotten kinfolk found hidden in a nation's neglected attic. Witness her down-to-the-buried-bone American story, written with colors of swamp mud, sky, and blended skin by an author besieged and besotted with the gift of dream-vision. Listen tight and you'll hear yourself humming along like you've always roamed and known this place, this sweat lodged swung low chariot pulsing through your heart, and still you survived.

Shonda Buchanan is a mesmerizing writer, one to watch.

– Janet Fitch, bestselling author of White Oleander, The Revolution of Marina M., and Chimes of a Lost Cathedral

Black Indian is an emotionally draining memoir that is also resonant in its discussions of poverty’s destructive forces.

With interwoven stories about the women in her Michigan family, Buchanan, the literary editor of Harriet Tubman Press, furthers the important work she has done in her poetry, uncovering the hidden histories of families struggling to define their mixed black and Native American bloodlines to their own satisfaction.

In her grimly haunting memoir, Buchanan reveals many aspects of American racism and sexism as she grapples with a painful legacy.

With a writing style that moves with ease in and out of the poetic, the no-nonsense, the tragic and a kind of endurance that is earthily and spiritually human, "Black Indian" is a read both intriguing and satisfying.

"[. . . ] there is a saving grace in the lives of Buchanan and her women relatives. Many of them have dreams that tell the future, that help guide them away from oncoming shipwrecks. It is through this alchemical magic that Buchanan is able to both reinvent herself and connect with the family she thought she had left behind.

Award-winning poet Shonda Buchanan honors multiple literary traditions in her breathtaking new memoir, Black Indian. An educator, freelance writer, and literary editor, Buchanan is a culture worker with deep, decades-long engagement in communities of color. Her work honors the complexity and diversity of these Black, Indigenous, and People of Color (BIPOC) communities. At once Indigenous, Black Female, Speculative, Feminist, Womanist, Urban, Southern Gothic, and counter to the Tragic Mulatto stereotype in American literature, stage, and film, Black Indian is a quintessentially American narrative.

An inherently fascinating, deftly written, thoughtful and thought-provoking memoir of an extraordinary woman and her extraordinary family.

It is a stark account of a rich, cultural heritage that is unnecessarily persecuted.

Interview on Off the Bricks: A Brick Street Poetry podcast (February 18, 2021)

Interview with the Sunlit Project and UNUM Magazine (December 3, 2020)

What to read, listen to, and watch to learn about institutional racism via PBS News Hour (June 5, 2020)

Interview with the Face of America series (April 9, 2020)

Interview on WGVU's The Morning Show with Shelley Irwin (August 28, 2019)