Home » Books » Birth of a Notion; Or, The Half Ain't Never Been Told 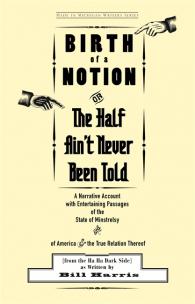 Birth of a Notion; Or, The Half Ain't Never Been Told

As Written by Bill Harris

In Birth of a Notion, poet and playwright Bill Harris confronts contemporary stereotypes and prejudices by looking back to their roots in early American history. In a hybrid work of prose and poetry that takes its cues from nineteenth-century minstrelsy, Harris speaks back to preconceived notions about "blackness" through many different characters and voices. His narrative is at turns sarcastic, serious, wry, and lyrical, as he investigates the source of pervasive racist images and their incorporation into American culture.

Harris takes readers on a tour of nineteenth-century American history, from the 1830s and the rise of the abolitionist movement, to Reconstruction and the Industrial Revolution in the 1860s, and to the beginning of the twentieth century. He considers cultural productions that gave rise to America’s idea of the "new Negro," including the development of minstrelsy as popular entertainment, the publication of Uncle Tom’s Cabin, the museum curios of P. T. Barnum, and the exhibitions of "exotic" people at the 1893 Chicago World’s Fair. Along the way, Harris interjects a range of symbols, word-play, and famous personalities into his narrative, referring to everyone from Karl Marx, Uncle Sam, Charles Dickens, Buffalo Bill, and Walt Whitman. He ends with the development of jazz and the blues as cultural products that would become important vehicles for self-representation in the new century.

Harris’s fast-paced narrative interspersed with graphic elements shows the importance of point-of-view in creating history, which always contains some elements of fiction as a result. Anyone interested in poetry, American history, and African American studies will appreciate Birth of a Notion.

Bill Harris is a Wayne State University emeritus professor of English. His plays have been produced nationwide, and he has published books of plays, poetry, and reappraisals of American history. He received the 2011 Kresge Foundation Eminent Artist award.

Through a virtuosic mastery of various literary genres, poet, playwright, and critic Bill Harris gives us an incisive, witty, and elegant account of the complex dimensions and often deeply disturbing realities informing the contentious American discourse(s) on racial mythology, cultural identity, and political history. Like its author, this book is profound, subtle, hilarious, and deadly serious."

– Kofi Natambu, author of The Melody Never Stops, What Is an Aesthetic? Writings on American Culture, and Malcolm X: His Life & Work and the editor of the Panopticon Review

Bill Harris's look at comedy as an integral part of the black aesthetic focuses on minstrelsy; however, it is simply a metaphor for his dissecting all the complex avenues of humor in so many corners of black America from D. W. Griffith's Birth of a Nation to the present."

– Woodie King, producing director of New Federal Theatre in New York and author of The Impact of Race

In the pernicious game of truth vs. myth, Bill Harris' hard-hitting Birth of a Notion knocks the ball all the way out of the park. Caringly researched and poetically delivered, this savvy book picks up the story of ethnic stereotyping from where the late filmmaker Marlon Riggs' Ethnic Notions leaves off. Like all official stories, social myth fills a need. The need for white American Christians to justify the riches they reaped from owning slaves seems obvious. But why does the myth of black inferiority persist? Harris steps up to the plate to hit at this and other crucial questions about the nature of spite, self-justification, and the self-defeating concepts of racial superiority and the Other."