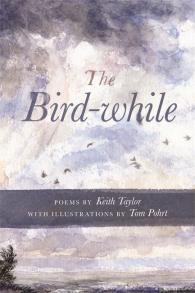 Poems by Keith Taylor
With illustrations by Tom Pohrt

"A Bird-while. In a natural chronometer, a Bird-while may be admitted as one of the metres, since the space most of the wild birds will allow you to make your observations on them when they alight near you in the woods, is a pretty equal and familiar measure" (Ralph Waldo Emerson’s Journal, 1838). Without becoming didactic or pedantic about the spiritual metaphor hidden in the concept of the "bird-while," Keith Taylor’s collection evokes certain Eastern meditative poets who often wrote in an aphoristic style of the spirit or the mind mirroring specific aspects of the natural world.

The Bird-while is a collection of forty-nine poems that meditate on the nature—both human and non-human—that surrounds us daily. Taylor is in the company of naturalist poets such as Gary Snyder and Mary Oliver—poets who often drew from an Emersonian sensibility to create art that awakens the mind to its corresponding truths in the natural world. The book ranges from the longer poem to the eight line, unrhymed stanza similar to that of the T'ang poet Han-Shan. And without section breaks to reinforce the passing of time, the collection creates greater fluidity of movement from one poem to the next, as if there is no beginning or end, only an eternal moment that is suspended on the page. Tom Pohrt’s original illustrations are scattered throughout the text, adding a stunning visual element to the already vivid language. The book moves from the author’s travel accounts to the destruction of the natural world, even species extinction, to more hopeful poems of survival and the return of wildness. The natural rhythm is at times marred by the disturbances of the twenty-first century that come blaring into these meditations, as when a National Guard jet rumbles over the treeline upsetting a hummingbird, and yet, even the hummingbird is able to regain its balance and continue as before. At its core, Taylor’s collection is a reminder of Emerson’s idea that natural facts are symbols of spiritual facts.

These well-crafted poems will be easily accessible to any literary audience, with a more particular attraction to readers of contemporary poetry sensitive to the marriage of an Eastern sensibility with contemporary American settings and scenes.

Keith Taylor teaches at the University of Michigan. He has published many books over the years: collections of poetry, a collection of very short stories, co-edited volumes of essays and fiction, and a volume of poetry translated from Modern Greek.

Tom Pohrt is a self-taught artist who has illustrated numerous books including The New York Times bestseller Crow and Weasel by Barry Lopez. He recently illustrated Terrapin and Other Poems by Wendell Berry and Careless Rambles, a selection of poems by John Clare. He lives in Ann Arbor, Michigan.

In The Bird-while, Keith Taylor spills a pouch of polished and found bits of knowledge clearly carried with him until they were just right and ready to be shared. Lessons of life and extinction mingle with a rhythmic reverence for continuity. Between city places and wild spaces, Taylor sheds a poem-light of passionate observation. He notices not just the sip of the hummingbird, but the pause between sips; not just the arrival of a sprout, but the fire that changed the earth it rises from. These are poems that place humanity in perspective, in a time and place dependent on understanding new ways to measure. I suspect a few birds have come to his feeders not just to eat seeds, but to read over his shoulder.

There is a gracious movement throughout these poems. They gain purchase in the heart and mind, and settle there to charm and sing and give pure pleasure. Birdsong as poetry. A rare feat. A gorgeous book.

As, in Keith Taylor's poetry, his ‘house contains mountains / and rivers and crimson sunbirds’ while, behind a postwar subdivision, still sits a man ‘on a large rock, a glacial / erratic’ who chips ‘a stone point from a piece of chert’ — so, as a seer and a reader and a thinker and a watcher, this poet brings to us visions from far beyond the ordinary world, peels away the layers and the limits, breathes life into the imaginary, makes the mystery tangible. Keith Taylor has not only lingered in the bird-while, seeing what others have missed, he has seen this world with a bird's eye-view, as well. So, in this, his most brilliantly shimmering book to date, we are transported and awakened and changed. Taylor's poetry gives us the most important gift that art has to offer: a transcendence of the quotidian, a glimpse far beyond what we'd assumed were the limits of our human understanding. His genius for the poetic is not only in music and imagery but in his generosity, his courage. He goes to places only real poetry goes, and he takes us along. The Bird-while is not only a beautiful and memorable, charming and frightening and startling book, it is a crucial one.

– Laura Kasischke, author of The Infinitesimals

Longtime readers of Keith Taylor’s work will be glad to have this new harvest of poems. Keith weaves together poems both from different periods in his life and from among his wide array of interests, bringing the whole of it seamlessly together. As must be the case with any writer who has reached Keith’s age, the theme—largely unremarked upon but clearly present—is time. A ‘bird-while,’ that all-too-fleeting moment a birder has to make his identification and observations of a sighting—is brief and fraught with urgency, like our own brief moment of life, a blurry speck in the onrush of centuries.

– Richard Tillinghast, author of Selected Poems and An Armchair Traveller’s History of Istanbul

Taylor’s poems are never heavy-handed but use observation and facts to explore our relationship to the earth: both showcasing our problematic historical relationship and also modeling how to relate deeply in the present moment.

The poems in his newest collection contain a close, almost scientific, attention to detail. This is a collection that delves into the truth of beauty, evanescence and life through communion with the natural world. [ . . . ] What a gift to spend some time with Keith Taylor in The Bird-while.

These poems exhibit a maturity of voice and mastery of craft not often found in contemporary poetry. Taylor seems to have done the long, hard work of discovering how to make the simple profound and the profound simple. It turns out that a bird-while is the exact time needed to fully live within a timeless moment.

3 hours 6 min ago
Happy Pub Date to THE SPOOK WHO SAT BY THE DOOR, SECOND EDITION! This new edition of a literary classic now includ… https://t.co/XrCsLZvf4D
3 hours 10 min ago
RT @DarkProjections: Returned from a great two weeks in Europe to find copies of my new book! Kolchak:The Night Stalker, one of the Pion… https://t.co/kPJ5kKLRyr
1 day 6 min ago
RT @oneitadetroit: Thrilled that @WSUPress is releasing the 2E of Sam Greenlee's "The Spook Who Sat by the Door" tomorrow. Introductio… https://t.co/hZpAjxluIl