Home » Books » Beyond the Windswept Dunes 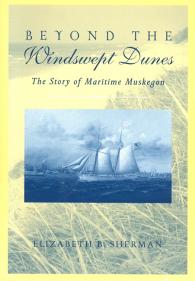 Beyond the Windswept Dunes

The Story of Maritime Muskegon

Beyond the Windswept Dunes takes the reader into a world of maritime adventure as it was experienced by the sailors, passengers, rescue workers, shipping magnates, industrialists, and many other people whose livelihoods revolved around Michigan’s port city of Muskegon. At one time the leading edge of westward expansion, Muskegon was a place where lumbering and lakers merged and where rails met decks, a place situated midway along the coast of a great and sometimes stormy inland sea. Here Elizabeth Sherman offers both a shipping history and a portrait of the city. The events covered range from the visit by the British sloop H.M.S. Felicity in 1779 through Muskegon’s boom years as "Lumber Queen of the World," from the city’s revitalization with the opening of the St. Lawrence Seaway to its recent establishment of a floating museum complex for historic naval vessels.

The book’s focus is on the ships themselves—such as the Lyman M. Davis, Salvor, Highway 16, and Milwaukee Clipper—vessels that were noteworthy for being the first of their kind or for their popularity, unusual and distinctive careers, or tragic losses. A number of ships were lost in Lake Michigan near Muskegon Harbor, and the stories of some of the most notable wrecks and rescue missions appear in this book, including the psychic intervention that led the William Nelson to the exciting rescue of the crew aboard the sinking Our Son. The book offers many first-hand statements of shipwreck survivors and other witnesses, lending an authentic voice to the accounts.

Elizabeth Sherman has made a notable contribution to Great Lakes maritime literature. Solid research and good reading mark this account of ships and shipwrecks along the Muskegon shore.

Beyond the Windswept Dunes is a wonderful contribution to Great Lakes history. It provides a fresh and detached examination of the many maritime disasters of the historic Lake Michigan port of Muskegon. [This book] will be an important part of my Great Lakes library.

Beyond the Windswept Dunes is a great treatment of local history. It's well-researched, carefully documented, and appealingly written. It's the most thorough and authoritative discussion I've seen of Muskegon's maritime history and it will be a very valuable resource as a result.

In telling the story of Muskegon's ships Sherman has made a contribution to the developing story of Lake Michigan history. Her research is solid and her prose is always lively. By focussing on one of the Inland Sea's secondary ports, Sherman has opened up new ground and because of this the book is a worthy addition to the library of any Great Lakes historian.

22 hours 47 min ago
Just in time for CYBER MONDAY! Get 30% off all WSU Press books with code HOL2 at checkout! https://t.co/FxRR36Oujc
2 days 22 hours ago
Today is #smallbusinesssaturday! Make a stop into your favorite local business or #indiebookstore, and get started… https://t.co/yddIwk9cIF
3 days 21 hours ago
Our holiday sale is officially here! Starting TODAY, take 30% off ALL BOOKS with code HOL2 at… https://t.co/s5Dp8iGvDg