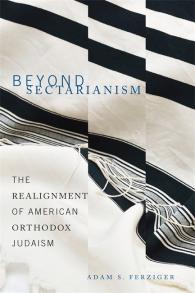 The Realignment of American Orthodox Judaism

In 1965 social scientist Charles S. Liebman published a study that boldly declared the vitality of American Jewish Orthodoxy and went on to guide scholarly investigations of the group for the next four decades. As American Orthodoxy continues to grow in geographical, institutional, and political strength, author Adam S. Ferziger argues in Beyond Sectarianism: The Realignment of American Orthodox Judaism that one of Liebman’s principal definitions needs to be updated. While Liebman proposed that the "committed Orthodox" —observant rather than nominally affiliated—could be divided into two main streams: "church," or Modern Orthodoxy, and "sectarian," or Haredi Orthodoxy, Ferziger traces a narrowing of the gap between them and ultimately a realignment of American Orthodox Judaism.

Ferziger shows that significant elements within Haredi Orthodoxy have abandoned certain strict and seemingly uncontested norms. He begins by offering fresh insight into the division between the American sectarian Orthodox and Modern Orthodox streams that developed in the early twentieth century and highlights New York’s Congregation Kehilath Jeshurun as a pioneering Modern Orthodox synagogue. Ferziger also considers the nuances of American Orthodoxy as reflected in Soviet Jewish activism during the 1960s and early 1970s and educational trips to Poland taken by American Orthodox young adults studying in Israel, and explores the responses of prominent rabbinical authorities to Orthodox feminism and its call for expanded public religious roles for women. Considerable discussion is dedicated to the emergence of outreach to nonobservant Jews as a central priority for Haredi Orthodoxy and how this focus outside its core population reflects fundamental changes. In this context, Ferziger presents evidence for the growing influence of Chabad Hasidism – what he terms the "Chabadization of American Orthodoxy."

Recent studies, including the 2013 Pew Survey of U.S. Jewry, demonstrate that an active and strongly connected American Orthodox Jewish population is poised to grow in the coming decades. Jewish studies scholars and readers interested in history, sociology, and religion will appreciate Ferziger’s reappraisal of this important group.

Adam S. Ferziger is a professor and holds the S.R. Hirsch Chair for Research of the Torah and Derekh Erez Movement in the Department of Jewish History and Contemporary Jewry at Bar-Ilan University, Ramat-Gan, Israel, and is co-convener of the Oxford Summer Institute for Modern and Contemporary Judaism, Oxford, UK. He is the author of Exclusion and Hierarchy: Orthodoxy, Nonobservance and the Emergence of Modern Jewish Identity and Jewish Denominations: Addressing the Challenges of Modernity.

At a recent conference, a speaker noted as a forgone conclusion that Chabad was the only force shaping the last decade of American Jewry. Prof Adam Ferziger responded strongly and loaded with data that the Yeshivish world has had a great influence in shaping the current American reality. His latest work Beyond Sectarianism: The Realignment of American Orthodox Judaism, examines this claim and in addition offers several other essays where he investigates the changes in American Orthodoxy of the last two decades.

– Alan Brill, The Book of Doctrines and Opinions

Beyond Sectarianism: The Realignment of American Orthodox Judaism, brings together nine essays, some more historically oriented than others, that collectively shed light on Jewish life in America today. While the book ostensibly examines Orthodox Judaism, readers will inevitably gain insight into many of the dynamics driving Jewish religious life across denominational divisions, in no small part due to Ferziger’s emphasis, reflected in the title, on groups within Orthodoxy moving beyond sectarianism. This post-sectarian movement inevitably puts these groups, and consequently the book’s reader, in contact with cultural and religious developments within the Reform and Conservative movements, as well as feminist and open Orthodox movements—in addition, of course, to Ferziger’s rich treatment of the nuances of haredi and modern Orthodoxy.

This book is "a must" for those who wish to understand the sociology of the American Orthodox movement and the
history of how it arrived there.

The great strength of Ferziger’s work is his ability to use historical episodes to support his sociological and theory-heavy framework.

Adam Ferziger is among the most serious students and incisive critics of contemporary Orthodox Judaism in the United States and Israel. This highly accessible compendium of essays evidences his uncommon abilities as a historian and sociologist. His keen delineation of past and present patterns of thought and behavior among this variegated group of traditional Jews will be welcomed by both scholars and general readers alike.

Adam Ferziger’s Beyond Sectarianism shows how American Orthodoxy evolved from a seemingly dwindling, splintered, and outmoded historical expression of Judaism into a dynamically expanding and perhaps newly coherent movement. Ferziger brilliantly tells his lively story, consistently providing powerful examples and scholarly details. His richly documented contention—that the gap between Modern and Haredi Orthodoxies is blurred and diminished—is intriguing. Whether or not readers agree with Ferziger’s interpretation that liberal Orthodoxy and its institutions are being effectively marginalized, they will learn much from his captivating accounts of passionate arguments, shifting attitudes, and unexpected alliances.

Adam Ferziger is one of the smartest and most perceptive scholars of Orthodox Jewish life. Trained in sociology and history, he brings both disciplines to bear on his research. Unlike earlier studies that used statistical and other data to discern a shift to the right in Orthodox life, Ferziger argues, perceptively, for a more complex realignment, with Modern Orthodoxy influenced by Haredi [Fervent] Orthodox trends, but also the reverse.

While each chapter of this book is interesting and persuasive on its own, the book still comes together as a compilation of essays on one central topic. Recommended to any student of American History and Orthodox Judaism, as well as to the general reader.

While the book ostensibly examines Orthodox Judaism, readers will inevitably gain insight into many of the dynamics driving Jewish life in America today.

Click here to listen to an interview with Adam from the New Books Network from May 28, 2016.

25 min 30 sec ago
TONIGHT! Join @stephanie_heit at @ShopBooksweet for local author's night! https://t.co/pTny5OErDe
22 hours 8 min ago
Have you had a chance to check out our new Spring & Summer 2023 Catalog?! From a new lyric essay collection to a p… https://t.co/cNAo9WjL9K
1 day 20 hours ago
RT @shondabuchanan: Tonight! Feb. 1, 2023, 6:30pm Mountain Time -- Virtual reading for #lewisandclarklibrary Lewis & Clark Library in H… https://t.co/UAmMoIlq1w