Home » Books » Beyond the Model T 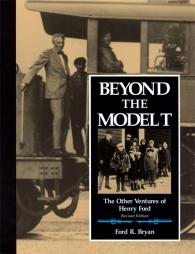 Beyond the Model T

The Other Ventures of Henry Ford

With over 200 photographs chosen from thousands in the collection of Henry Ford Museum & Greenfield Village, Beyond the Model T gives attention to Henry Ford's numerous ventures outside of the auto industry. This revised edition, with 26 additional photographs and two new chapters, completes the portrait of Ford's life, giving depth to a man previously known only for the Model T. Through vivid photographs and narration, Ford's boundless energy and vision are revealed.

An enthusiastic and courageous entrepreneur, Henry Ford used profits from the Model T to launch projects in a multitude of areas, from education to rubber production. Ford R. Bryan presents an unknown Henry Ford, focusing on his experimental humanitarian and business enterprises- including those that failed. New to this edition are chronicles of factory and general hospitals, nursing schools and services, health clinics, and a research institute established by Henry Ford, and the more than a dozen commissaries Ford operated, selling a wide assortment of items to Ford employees and their families from pillow cases to children's shoes. These accounts give testimony to Ford's investment in the well-being of the working class, a category in which he included himself despite his wealth, and disclose his dreams for a country upon which he undeniably left his mark.

Ford R. Bryan was a historical researcher at the Henry Ford Museum & Greenfield Village Research Center. He was educated at Eastern Michigan University and the University of Michigan, and was a Ford Motor
Company employee for more than thirty years. He is the author of Henry's Attic: Some Fascinating Gifts to Henry Ford and His Museum (1995), Henry's Lieutenants (1993),
and The Fords of Dearborn: An Illustrated History (1989).