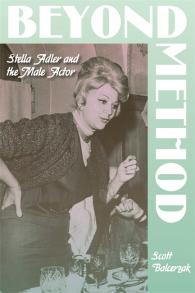 Stella Adler and the Male Actor

Stella Adler (1901–92) trained many well-known American actors yet throughout much of her career, her influence was overshadowed by Lee Strasberg, director of the Actors Studio. In Beyond Method: Stella Adler and the Male Actor, Scott Balcerzak focuses on Adler’s teachings and how she challenged Strasberg’s psychological focus on the actor’s "self" by promoting an empathetic and socially engaged approach to performance. Employing archived studio transcripts and recordings, Balcerzak examines Adler’s lessons in technique, characterization, and script analysis as they reflect the background of the teacher—illustrating her time studying with Constantin Stanislavski, her Yiddish Theatre upbringing, and her encyclopedic knowledge of drama. Through this lens, Beyond Method resituates the performances of some of her famous male students through an expansive understanding of the discourses of acting.

The book begins by providing an overview of the gender and racial classifications associated with the male "Method" actor and discussing white maleness in the mid-twentieth century. The first chapter explores the popular press’s promotion of "Method" stars during the 1950s as an extension of Strasberg’s rise in celebrity. At the same time, Adler’s methodology was defining actor performance as a form of social engagement—rather than just personal expression—welcoming an analysis of onscreen masculinity as culturally-fluid. The chapters that follow serve as case studies of some of Adler’s most famous students in notable roles—Marlon Brando in A Streetcar Named Desire (1951) and The Missouri Breaks (1976), Robert De Niro in Taxi Driver (1976), Henry Winkler in Happy Days (1974–84), and Mark Ruffalo in The Avengers: Age of Ultron (2015). Balcerzak concludes that the presence of Adler altered the trajectory of onscreen maleness through a promotion of a relatively complex view of gender identity not found in other classrooms.

Beyond Method considers Stella Adler as not only an effective teacher of acting but also an engaging and original thinker, providing us a new way to consider performances of maleness on the screen. Film and theater scholars, as well as those interested in gender studies, are sure to benefit from this thorough study.

Scott Balcerzak is associate professor of film and media in the department of English at Northern Illinois University. He is the author of Buffoon Men: Classic Hollywood Comedians and Queered Masculinity (Wayne State University Press, 2013). He is also the co-editor of Cinephilia in the Age of Digital Reproduction: Film, Pleasure, and Digital Culture, Vols. 1 and 2.

Beyond Method is an innovative approach to star and performance studies, offering insightful discussions of male acting, performing masculinity, Stella Adler’s teaching, and the Method as it signified historically after the war. A major book!

– Steven Cohan, author of Masked Men: Masculinity and the Movies in the Fifties

In Beyond Method: Stella Adler and the Male Actor, Scott Balcerzak skillfully highlights the role of Stella Adler (often eclipsed by that of Lee Strasberg, director of the Actors Studio) in training the white male actor. While Strasberg focused on mining the psychology of the performer, Adler (drawing on Stanislavskian theory) concentrated more on behaviorism, sociological observation, and bodily technique. Among her famous students that Balcerzak considers are Marlon Brando, Henry Winkler, and Mark Ruffalo—showing the range of Adler’s pedagogy and appeal. A well-researched and well-written book that sets the record straight.

Balcerzak’s brilliantly researched book will interest readers in many fields. It provides an introduction to legendary acting teacher Stella Adler, shows that performances thought to exemplify Method acting depend on her techniques, and considers celebrated portrayals of American masculinity as responses to the Cold War, late capitalism, and the post-suffrage era.

The connections between politics, social currents, and acting techniques are drawn out in Beyond Method, Scott Balcerzak's illuminating book on Stella Adler's teachings and masculinity on screen. [. . .] Acting [. . .] is what it is in part because it announces itself as such. [This book] helps us to understand the amplitude of that announcement and find both the magic and labor in it.

Balcerzak’s insightful, astute interpretations and observations across a range of media and actors make Beyond Method a dense read, richly rewarding the effort.

Beyond Method: Stella Adler and the Male Actor is an invaluable contribution to the history of acting, not only on the screen, but across media as well. Using newly observed archival resources, he is finally able to give Stella Adler her due within this history. Moreover, this book aids in disentangling the often-confusing ideas about the Method by correcting the public record about two of the actors (Brando, De Niro) wrongly associated with this practice. Instead, Balcerzak’s research provides an entirely new narrative, not only related to the trope of acting, but for Stella Adler, one of the most important figures of the twentieth century.