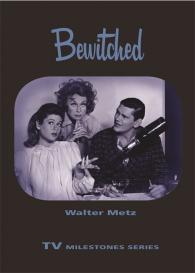 The classic situation comedy Bewitched chronicled the everyday lives of Samantha, a witch, and Darrin Stephens, her mortal husband, dramatizing the often-humorous troubles caused by their "mixed marriage." For much of its eight-year run, Bewitched enjoyed strong popularity because of its broad appeal. A parade of magical characters, animals, special effects, and gimmickry used to portray witchcraft ensured that the series appealed strongly to children, while its domestic tensions, feminist undertones, and hints at gay and lesbian subculture grabbed the attention of adult viewers. Bewitched also participated in industrial innovations, like the shift from black-and-white to color television production, and found itself caught in the political shift from Lyndon Johnson’s Great Society to Richard Nixon’s staunch conservatism. With all of these factors in mind, Walter Metz considers the series an important touchstone in 1960s and 1970s culture.

Previous academic criticism on Bewitched only considers a handful of episodes. This book considers the Bewitched series as a whole, demonstrating that the show can look very different depending upon which of its episodes are being examined. Metz draws several interlocking themes from the series, including the political identity conflicts that arise from the Stephenses’ marriage, the significance of history raised by characters popping in and out of the past, the postwar surveillance culture represented by the fear of discovery of Samantha’s secret, and the show’s self-reflexive stance toward television itself. In addition, Metz situates Bewitched in television history, examining the ways that its production techniques, storylines, and characters both borrowed from the past and contributed their own innovations to the medium.

A cult favorite that continues to air regularly more than forty years after it first premiered, Bewitched has claimed a prominent place in television history. Scholars of film and television studies, along with fans of the show, will appreciate Metz’s careful look at the show’s appeal and the serious issues raised by this beloved and deceptively simple sitcom.

Walter Metz is associate professor and chair of the department of Cinema and Photography at Southern Illinois University at Carbondale.

Among the many gaps in television history is the lack of detailed analysis of individual television series. Here Walter Metz carefully places Bewitched in a range of contexts–personal, industrial, aesthetic, gendered, historical. In doing so he demonstrates how a single popular program distills, intensifies, and somehow 'magically' examines our most significant cultural questions."

– Horace Newcomb, director, the George Foster Peabody Awards and editor of The Museum of Broadcast Communications Encyclopedia of Television and Television: The Critical View, 7th edition

An appropriately inspired analysis of one of TV's most inspired–and undervalued–sitcoms. From his opening proposition of a 'queer reading' of Bewitched to his savvy analysis of its portrayal of ideology, class, and especially gender, Walter Metz builds a convincing case that this slice of 1960s 'everyday television' was among that era's most progressive depictions of marriage and family, and a key precursor to the burgeoning feminist movement."

– Thomas Schatz, executive director, University of Texas Film Institute and author of The Genius of the System: Hollywood Filmmaking in the Studio Era