Home » Books » Between Exile and Exodus 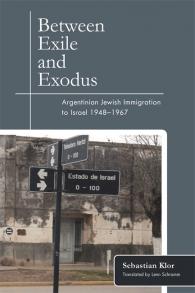 Between Exile and Exodus

Between Exile and Exodus: Argentinian Jewish Immigration to Israel, 1948–1967 examines the case of the 16,500 Argentine Jewish immigrants who arrived in Israel during the first two decades of its existence (1948–1967). Based on a thorough investigation of various archives in Argentina and Israel, author Sebastian Klor presents a sociohistoric analysis of that immigration with a comparative perspective. Although many studies have explored Jewish immigration to the State of Israel, few have dealt with the immigrants themselves.

Between Exile and Exodus offers fascinating insights into this migration, its social and economic profiles, and the motivation for the relocation of many of these people. It contributes to different areas of study— Argentina and its Jews, Jewish immigration to Israel, and immigration in general. This book’s integration of a computerized database comprising the personal data of more than 10,000 Argentinian Jewish immigrants has allowed the author to uncover their stories in a direct, intimate manner. Because immigration is an individual experience, rather than a collective one, the author aims to address the individual’s perspective in order to fully comprehend the process. In the area of Argentinian Jewry it brings a new approach to the study of Zionism and the relations of the community with Israel, pointing out the importance of family as a basis for mutual interactions. Klor’s work clarifies the centrality of marginal groups in the case of Jewish immigration to Israel, and demystifies the idea that Aliya from Argentina was solely ideological. In the area of Israeli studies the book takes a critical view of the "catastrophic" concept as a cause for Jewish immigration to Israel, analyzing the gap between the decision-makers in Israel and in Argentina and the real circumstances of the individual immigrants. It also contributes to migration studies, showing how an atypical case, such as the Argentine Jewish immigrants to Israel, is shaped by similar patterns that characterize "classical" mass migrations, such as the impact of chain migrations and the immigration of marginal groups.

This book’s importance—its contribution to the historical investigation of the immigration phenomenon in general, and specifically immigration to the State of Israel—lies in uncovering and examining individual viewpoints alongside the official, bureaucratic immigration narrative.Scholars in various fields and disciplines, including history, Latin American studies, and migration studies, will find the methodology utilized in this monograph original and illuminating.

Sebastian Klor is a lecturer at the Department of Jewish History at Haifa University. Between 2013 and 2015 he was a postdoctoral fellow at the Schusterman Center for Jewish Studies at the University of Texas at Austin.

Sebastian Klor has skillfully reconstructed the immigration of Jews from Argentina to Israel between 1948 and 1967. For many tens of years Argentina, in the absence of a Jewish sovereign state - perhaps more than any other country, and before Israel - was the more accomplished expression of a long-standing Jewish utopian strive to territorial and cultural autonomy and self-realization. But after World War II the flow of Jewish migration changed its main direction and Argentina transformed from a net receiver to a supplier of Jewish migrants. This book unveils the background, predicament, and profile of those who arrived in Israel, and their struggle with Israeli absorption policies. The case of Argentinian Jews teaches important lessons for the broader understanding of Jewish international migration, and for other countries currently dealing with immigration.

In this pioneering study, Sebastian Klor reveals an unknown dimension of Jewish migration from Latin America in general and Argentine in particular in second half of the twentieth century. Between Exile and Exodus profoundly illuminates the journey of Argentinian Jews to Israel. Klor explores the push and pull factors both in the countries of origin and destination, the tension between ideology and economic migration, the immigrants’ motivation that uprooted their homeland and arrived to a new country and the adjustment process in the young Israeli society. No one before Klor has charted the Jewish migration from Argentine so objectively and comprehensively.

– Gur Alroey, The University of Haifa

Klor's fascinating study on immigration from Argentina to Israel challenges former studies, accepted beliefs, and the official Israeli discourse. His analysis of thousands of individual cases shows the complexity of the reality in Argentina and demonstrates the centrality of personal decisions in the process of immigration.

Based on impressive archival research, this is an original and important study that challenges traditional ideologically biased historiography. Clearly written and argued, Between Exile and Exodus should be of interest to scholars and students of Jewish history, migration studies, and diaspora studies.

5 hours 28 min ago
HAPPY PUB DATE! Dan Gerber said "If you make yourself available to Cindy Hunter Morgan’s poems, they will revivif… https://t.co/L60dTqsUUj
1 day 1 hour ago
Grab your copy or e-book of @fkwang's YOU CANNOT RESIST ME WHEN MY HAIR IS IN BRAIDS today! https://t.co/htFDjNa9yj https://t.co/zHyt049441
4 days 3 hours ago
Wayne State University Press is proud to announce our winner and finalists of the 2022 Next Generation Indie Book A… https://t.co/Ozy1WEQY1i