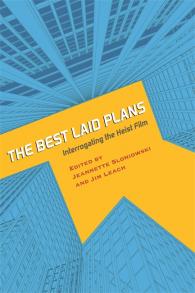 The heist—a carefully organized robbery of a financial institution or other lucrative business—has been a persistent and popular mainstay of the crime film. The Best Laid Plans: Interrogating the Heist Film asks the question: why has the heist film proved so appealing to audiences over many years and in diverse cultural contexts? The twelve essays in this volume, edited by Jim Leach and Jeannette Sloniowski, explore the significance of the heist film in different national cinemas, as well as its aesthetic principles and ideological issues such as representation of gender, race, and class.

The essays are organized in three parts dealing with the heist film's international presence, the subgenre's social and cultural implications, and some theoretical ways of approaching it. For example, contributor Tim Palmer challenges traditional notions of French film history that emphasize critically acclaimed art films by pointing to the rich achievements of critically defamed and neglected, but extremely popular, crime films; Gaylyn Studlar surveys heist films in light of feminist theories that illuminate stereotypical characterizations of both men and women in the heist; and Hamilton Carroll compares James Marsh’s documentary Man on a Wire—which draws on heist conventions to depict Philippe Petit’s unauthorized tightrope walk in 1974 between the two towers of the World Trade Center—to Spike Lee’s New York–set heist film Inside Man.

The Best Laid Plans includes an accessible group of essays that will meet the needs of students and scholars in film and media studies by offering new insights into an important and neglected area in genre criticism.

Jim Leach is professor emeritus in the Department of Communication, Popular Culture and Film at Brock University. He is the author of books on filmmakers Alain Tanner and Claude Jutra, as well as the author of British Film and Film in Canada. He has also published a monograph on Doctor Who (Wayne State University Press, 2009), co-edited a volume on Canadian documentary films, and developed a Canadian edition of an introductory film studies textbook.

The Best Laid Plans offers a fascinating range of essays that illuminates how the heist film, unlike other crime films, permits the viewer to relish in the success of its criminals and, for this reason, will no doubt be relished by scholars and fans of the genre alike.

The Best Laid Plans is an excellent volume on this much-beloved and understudied genre. International in scope and conceptually rich, this is contemporary film studies at its best. I finished it wanting to teach a course on the heist film and use this as the textbook.

The tremendous geographical, historical, and methodological range of the essays in The Best Laid Plans makes this collection an essential addition to the existing literature on the vibrant and complex genre of the heist film. Highly recommended for anyone interested in crime, film, and popular culture.

Readers who take pride in thinking the United States the heist capital of the planet will be enlightened, entertained, and perhaps sobered to see the sweeping range of criminal activity Sloniowski and Leach’s contributors reveal in films from around the world. From Canada to France to Japan, from the 1950s to 9/11, these dozen essays make a strong case for the heist genre as an international conspiracy of filmmakers just as gifted as the thieves whose best-laid plans show that crime does not pay, unless it does.