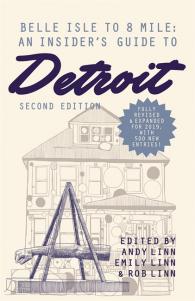 Seventh-generation Detroiters Andy Linn, Emily Linn, and Rob Linn, and local business City Bird produced Belle Isle to 8 Mile: An Insider’s Guide to Detroit, Second Edition, the second edition of the most popular printed guide to the city in a generation. Six years since the original book, and fully revised and expanded for 2019, this new edition includes 45 new illustrations and more than 500 new entries and featured locales. In total, the book highlights more than 1,500 Detroit attractions, sites, institutions, events, restaurants, bars, shops, and curiosities, from the essential to the obscure, making this edition of Belle Isle to 8 Mile the most comprehensive Detroit guide book ever published, in the known record.

The result of thousands of hours of research, thousands of site visits, and contributions and ideas from hundreds of local residents, this community-driven, streetwise guide is a key for readers to unlock the city. Led by the Linns, the Belle Isle to 8 Mile team administered surveys, conducted in-depth research, and explored the widest-reaches of the city’s neighborhoods to document the full scope of the city’s 139 square miles. Like its predecessor, the book builds off of this in-depth research to chronicle both long-standing institutions and off-the-beaten-path neighborhood treasures and hidden gems that make the city so special, documenting each featured locale in historical context, with informative descriptions that capture what make them special, as well as ample touches of humor along the way.

However, the expanded second edition of the book also captures the ways in which Detroit has grown and evolved since the publication of the first volume, acting as a printed account and living document of a changing city, as well as a testament to the small, independent businesses that have continued to thrive in the neighborhoods and driven the city’s evolution. In addition to entries that detail more than1,500 locations and destinations organized geographically to encourage exploration, the book features maps and original, intricate pen and ink illustrations to help orient readers as well as an alphabetical index to aid discovery and utility.

The book also employs a star system throughout the volume to denote destinations that are exceptional, particularly unique, or essential for first time visitors. In addition, in chapter 13, the editors highlighted recommended top destinations for particular tastes to help plan a visit, including rounding up top architectural destinations, vegetarian options, cheap eats, soul food, family activities, and many other areas, for residents and tourists alike.

From high art to folk art, national attractions to basement museums, haute cuisine to food trucks, cocktail bars to dive bars, farmer’s markets to urban farms, and rock ’n’ roll to blues and soul—and whether in Detroit for the first time or for a lifetime, or learning about it from afar—readers will delight in uncovering and discovering this great American city. This guide is essential reading, not just for visitors, but for long-time residents, as well as for anyone who loves Detroit.

Andy, Emily, and Rob Linn are siblings and lifelong, seventh-generation Detroiters. Authorities on and lifelong students of the city’s rich history and culture, Andy and Emily own City Bird and Nest, popular retail storefronts in the city’s Cass and Canfield shopping district, while Rob is the Assistant Director of Inventory at the Detroit Landbank Authority.