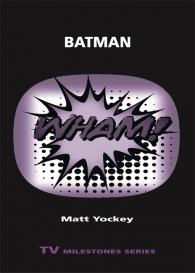 ABC’s action-comedy series Batman (1966–68) famously offered a dual address in its wildly popular portayal of a comic book hero in a live action format. Children uncritically accepted the show’s plots and characters, who were guided by lofty ideals and social values, while adults reacted to the clear parody of the values on display. In Batman, author Matt Yockey argues that the series served as a safe space for viewers to engage with changing attitudes about consumerism, politics, the Vietnam war, celebrity, race, and gender during a period when social meaning was increasingly contested in America.

Yockey examines Batman’s boundary pushing in four chapters. In "Bat-Civics," he analyzes the superhero as a conflicted symbol of American identity and considers the ways in which the Batman character parodied that status. Yockey then looks at the show’s experimentation with the superhero genre’s conservative gender and racial politics in "Bat-Difference" and investigates the significance of the show’s choices of stars and guest stars in "Bat-Casting." Finally, he considers how the series’ dual identity as straightforward crime serial and subversive mass culture text set it up for extratextual production in "Bat-Being."

The superhero is a conflicted symbol of American identity—representing both excessive individualism and the status quo—making it an especially useful figure for the kind of cultural work that Batman undertook. Batman fans, from popular culture enthusiasts to television history scholars, will enjoy this volume.

Matt Yockey is assistant professor of film studies at the University of Toledo. His work on fan studies and the superhero genre has appeared in such publications as The Journal of Fandom Studies, Transformative Works and Cultures, The Velvet Light Trap, and Studies in Comics.

Matt Yockey's marvelous volume on Batman deftly captures the complexities of the Adam West TV show. From consumerism to civics, from the political contradictions embodied in Yvonne Craig’s Batgirl and Eartha Kitt's Catwoman to the irresistible campy playfulness of Liberace meeting Batman, Yockey combines close analysis of the episodes with a detailed historical context. The most expert Bat-fan will find something new, fascinating, and fun in Yockey’s critical but affectionate study.

– Will Brooker, professor at Kingston University and author of Batman Unmasked and Hunting the Dark Knight

Matt Yockey pulls off one mask after another to reveal the multiple double identities at work in the iconic 1960s Batman television series—a program for adults as well as children; Pop art as well as trash culture; progressive parody as well as conservative and patriarchal propaganda; mass market commodity as well as incitement for playful participation, attracting both fans and anti-fans. As a child of the 1960s, Batman is a sacred text for me, but Yockey knows his stuff, takes the series seriously enough to understand its meaningfulness, but still remembers how much fun this Bat-text can be.

This book makes a convincing case for the significance of the 1960s TV series Batman by showing how its parodic tone and Pop art visuals negotiated the major issues of its time, from gender and race to consumerism and citizenship. Today, when the ‘Dark Knight’ version of this comic book figure has attracted so much attention, this lively study reminds us of the formative role this TV program had in self-reflexively mining the ambivalences of postwar American society in a manner that would pave the way for future Batmen.

Matt Yockey’s long-needed volume rescues the iconic series from its usual footnoted treatment in television history as either a bold experimental failure or a sign of mid-1960s cultural vapidity. Yockey displays a thorough understanding of the ramifications of this particular comic book character, the status of television, and the issue of 'mass' culture itself at that moment in American history. In particular, he explains how the series’ much-noted camp aesthetic functioned with precise timing in the mid-1960s, channeling childhood nostalgia into a more skeptical adulthood and
'exploit[ing] Pop art and camp strategies to authorize viewers to interrogate national values by way of a collective memory of the superhero.'

Taken as a spoof, reruns of that old show are a treat, particularly in the shadow of the recent and very dark Chris Nolan trilogy. Sadly, the series still isn’t available on DVD (although the spinoff movie is), but Yockey’s book will fill a gap, as he discusses the social and cultural impact of the show and recalls moments of great humor (like when a tied-up Robin catches the bat-rope with his teeth, and Batman tells him that good dental health saved his life). The author digs deep, but it never feels like the tone is too heavy. The show was ludicrous, and Yockey has a blast getting playful with the themes and characters.

Yockey’s Batman is neither a superficial essay nor a collection of anecdotes or personal impressions by a die-hard fan, rather an excellent study in Mass Culture and, this reviewer would add, it may possibly serve as an accurate general introduction to the discipline of American studies, even though it was not meant to be.