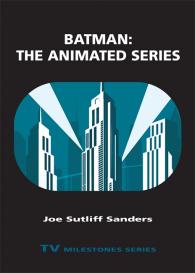 It’s possible that no other version of Batman has been more influential than the one that debuted as a children’s cartoon in 1992. For millions of fans around the world, the voices of Batman and the Joker introduced in Batman: The Animated Series (BTAS) remain the default. The characters, designs, and major themes of the show went on to shape other cartoons, films, and bestselling video games. In this study, Joe Sutliff Sanders argues that BTAS is not only a milestone of television but a milestone in the public persona of one of the most recognizable characters in the world.

The series introduced a new generation to Batman and provided the foundation for a family of cartoons that expanded the superhero universe. It introduced or reinvented major characters including Mr. Freeze, Robin, the Joker, and Harley Quinn. In three chapters, Sanders pursues the intricate arguments that still energize BTAS. Chapter 1 explores the visuals of the show, the artistic histories and tensions that inform its revolutionary style, and what ideas—intentional and otherwise—its aesthetic implies. Chapter 2 turns to the task of defining a "good" wealthy person against a backdrop of "bad," getting to the heart of one of Batman’s most problematic characteristics. Lastly, chapter 3 considers Harley Quinn, a character who emblemizes much of what made BTAS successful. From her first appearance, Harley has been both sexy and witty, victor and victim, and this chapter explains the duality that defines her.

Since its debut in 1992, BTAS has garnered multiple awards, launched or developed the careers of countless important artists, and created aesthetic styles—in terms of both visuals and voice acting—that continue to resonate. Sanders’s book follows an informative and exciting path through the material and is designed to be accessible to aficionados as well as relative newcomers. Batman fans, popular culture enthusiasts, and media studies scholars will find within these pages insights and ironies to provoke endless conversations.

Joe Sutliff Sanders is a specialist in children’s media at the University of Cambridge. He is also the author of Disciplining Girls and A Literature of Questions.

In a long overdue analysis of what has become one of the most influential animated TV series ever, Joe Sutliff Sanders cuts through glib fan and industry rhetoric to offer close readings of the show’s most prominent achievements. In his address of Dark Deco aesthetics, the psycho-pathologies of wealth, and the prominence of Harley Quinn as the embodiment of feminist discourses in the 1990s, the discussion elevates debates not only about Batman but popular culture, TV production, and animation as a distinctive art form.

A fascinating celebration and interrogation of the animated series that drills down below the show's sleek design—which we soon learn is more streamline than deco—to reveal Gotham City's nuanced conflicts around class and gender. Like Batman himself, Joe Sutliff Sanders approaches his subject with passion, commitment, and a forensic attention to detail, examining how the show was influenced by—and influenced—comics and movies, and its role in shaping the Arkham video games. An affectionately critical tribute, this is the ideal companion for fans and scholars revisiting the animated series.

– Will Brooker, author of Batman Unmasked and Hunting the Dark Knight

In his incisive study of Batman: The Animated Series, Joe Sutliff Sanders proves that there are still many secrets to be uncovered in the Batcave. Fortunately, he is as keen a detective as he is a savvy writer, and this monograph is strong evidence for the importance of the series in the character’s long history.

I was tempted to trot out the dusty criticism of "my only complaint is that the book is TOO SHORT" but the sheer depth of the text stopped me from doing so. Yes, I read the book in one sitting but it repeatedly made me stop and think about some of the points it raised. Split into three parts, the book tackles the "Dark Deco" aesthetics of the show’s universe, how the show views the wealthy, and (in my opinion) the toughest nut to crack…Harley Quinn. Sutliff’s book is the scholarly take on B:TAS that I didn’t know I needed but am overjoyed to have discovered.

BTAS was a milestone of television, and now it gets true highbrow treatment as a University of Cambridge scholar puts it through academic analysis. There’s no full-color illustrations or exclusive interviews here. Rather, it contains critical analyses about artistic, social, cultural, and political influences. So if you want an exposition on BTAS the way a university-level literature class might dissect a 19th-century Russian novel, Sanders’ work is worth a try.

Finished Joe Sutliff Sanders new book Batman: The Animated Series. It is a welcome addition to the TV Milestone Series. In the book, Sanders shows how the aesthetic roots of the show are less Art Deco and more in keeping with "streamlining" art and design movements of the 1930s. Perhaps Sanders' most unique claim in the book revolves around the character Harley Quinn, who he argues represents the messiness and complexity of 1990s feminism discourse when the show aired. The book will appeal to fans young and old alike. It will also appeal to academics working on Batman and various iterations of the character. Great read!

BTAS has been previously overlooked in academic scholarship, and Sanders covers this popular adaptation from a number of angles. His use of deep textual analysis to discuss wider socio-cultural themes present in BTAS is very competent and raises interesting ideas and questions. The approach and writing style is accessible to a wide audience, and fans of the batman franchise, as well as those interested in animation, will find reading this book a rewarding experience.

Batman: The Animated Series begins with an eyeopening
preface. In it, Sutliff Sanders gives the reader a
virtual guided tour of his lifelong love of all things Batman.
At every step, he connects this near obsession,
born in his youth, to his mature interest in the power
of visual art and rhetoric to influence society. In every
paragraph he makes connections and displays curiosity,
welcoming both the layman Batman enthusiast and
the traditional academic more interested in research.