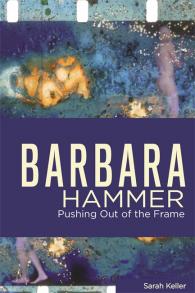 Pushing Out of the Frame

Barbara Hammer: Pushing Out of the Frame by Sarah Keller explores the career of experimental filmmaker and visual artist Barbara Hammer. Hammer first garnered attention in the early 1970s for a series of films representing lesbian subjects and subjectivity. Over the five decades that followed, she made almost a hundred films and solidified her position as a pioneer of queer experimental cinema and art.

In the first chapter, Keller covers Hammer’s late 1960s–1970s work and explores the tensions between the representation of women’s bodies and contemporary feminist theory. In the second chapter, Keller charts the filmmaker’s physical move from the Bay Area to New York City, resulting in shifts in her artistic mode. The third chapter turns to Hammer’s primarily documentary work of the 1990s and how it engages with the places she travels, the people she meets, and the histories she explores. In the fourth chapter, Keller then considers Hammer’s legacy, both through the final films of her career—which combine the methods and ideas of the earlier decades—and her efforts to solidify and shape the ways in which the work would be remembered. In the final chapter, excerpts from the author’s interviews with Hammer during the last three years of her life offer intimate perspectives and reflections on her work from the filmmaker herself.

Hammer’s full body of work as a case study allows readers to see why a much broader notion of feminist production and artistic process is necessary to understand art made by women in the past half century. Hammer’s work—classically queer and politically feminist—presses at the edges of each of those notions, pushing beyond the frames that would not contain her dynamic artistic endeavors. Keller’s survey of Hammer’s work is a vital text for students and scholars of film, queer studies, and art history.

Sarah Keller is associate professor of art and cinema studies at the University of Massachusetts Boston. Her research focuses on experimental form, film experience, and feminist issues in cinema. She is co-editor of Jean Epstein: Critical Essays and New Translations and author of Maya Deren: Incomplete Control and Anxious Cinephilia: Pleasure and Peril at the Movies.

Across nearly fifty years, Barbara Hammer produced a pathbreaking body of feminist filmmaking that forever transformed how sexuality, selfhood, community, and history could be explored through cinema. Finally, in Sarah Keller’s passionate and erudite monograph, we have a comprehensive, inspiring guide to the achievements of an artist whose relevance continues to burn bright.

Meticulously researched, gorgeously illustrated, and comprehensively covering Barbara Hammer’s extensive body of films, as well as its wide-ranging treatment by Hammer and others, Sarah Keller’s Barbara Hammer: Pushing Out of the Frame celebrates a lesbian feminist career and legacy that, while diverse and adaptive, always evidences Hammer’s credo: ‘Art is Energy!’ With tender attention to many of Hammer’s 100+ films as well as her copious and careful archives, Keller allow us time to sit with this oeuvre, built and enjoyed over decades, while unobtrusively making her own claims—in conversation with Hammer—about feminist, queer, and experimental cinema, as well as feminist and lesbian art, history, and archives. Drawing on Hammer’s creative output across decades, themes, and artistic approaches, Keller provides new shape to Hammer’s definitive ‘eclectic curiosity and roving interests,’ her ‘radical openness,’ and her ‘medium promiscuity,’ as she takes up a range of radical forms to make visible her radical concerns: with self (and other); the female body, sexuality, and illness; queer and lesbian identity, community, and interactivity; and cinema and archival form and herstory. Hammer’s powerful commitments also include feminist, lesbian, and queer legacy, including her own. ‘You want a book? You ask for it,’ she informed Keller in a late-life interview. Keller delivers, and how.

Sarah Keller’s stature as a preeminent critical historian of experimental film and media is extended in her expansive analysis of Barbara Hammer’s films and writings. Barbara Hammer challenges our understanding of the history of experimental film, feminist theory, and lesbian and queer art through Keller’s insightful validation of Hammer’s critical curiosity and joy.

Sarah Keller’s landmark study arrives just in time to help us come to terms with the cessation of Hammer’s extraordinary creative output. From Dyketactics, Hammer’s legendary ‘lesbian commercial’ of 1974, to Evidentiary Bodies, the installation exploring living with terminal cancer made just before her death in 2019, the filmmaker experienced her creativity and connection with viewers urgently. Keller’s sensitive critical writing illuminates that project with a generosity and openness that honor Hammer’s passion.

Barbara Hammer: Pushing Out the Frame is not only a timely celebration of the life and work of a beloved foundational figure of Queer Cinema but also a necessary revision of the importance of Hammer’s pre- and post-1970s expanded practice to the art world and to contemporary understandings of sexuality, embodiment, and media.

– Rebecca A. Sheehan, author of American Avant-Garde Cinema’s Philosophy of the In-Between

Keller’s book is a celebration of Hammer’s work, both comprehensive and incisive.

Because Keller’s primary focus rests on the longitudinal evolution of Hammer’s expression and her development of the technical skills needed to bring that expression to the screen, this book will be most useful to critics, theorists, and historians of film, as well as graduate students in training for those specializations.