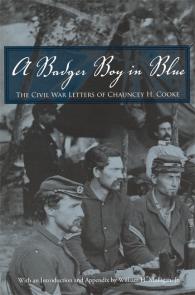 A Badger Boy in Blue

With an Introduction and Appendix by William Mulligan, Jr.

Marching off to war with Chauncey Cooke, The Badger Boy in Blue, is an adventure not to be missed.

Chauncey H. Cooke enlisted in the Union army in 1862 at only sixteen, after lying about his age. Like many soldiers, Cooke saw only limited action in battle, but his letters to family members paint a realistic and compelling picture of daily life in the Civil War. Alongside dramatic descriptions of encounters with Indians, comrades, rebel prisoners, slaves, and Southern whites, Cooke also describes the boredom of camp, the chaos of battle, and the suffering caused by illness. Cooke’s emotional closeness to his family, especially his mother, also comes across strongly in his letters, and readers will feel an instant connection to the young soldier through his words.

Among other collections of Civil War writings, A Badger Boy in Blue stands out because of the wealth of rich detail included in Cooke’s letters. Readers are presented with an accurate picture of a soldier’s daily life through Cooke’s commentary on everything from the food he ate, to the weather, to the kind of paper that he used for writing. In addition, Cooke’s descriptions of battle are valuable in offering fresh insight into the often-overlooked midwestern armies and campaigns. His descriptions of the siege of Vicksburg and the Atlanta Campaign are especially thoughtful and unique. The letters also present empathetic and colorful portraits of the frightened, defiant, and curious civilians that the army encountered along the way.

William Mulligan, Jr., provides an introduction and annotations in A Badger Boy in Blue to add expert commentary and context for Cooke’s letters. Four maps are also included to clarify locations mentioned in the text. History buffs, scholars, and general readers interested in the Civil War will appreciate this thorough volume.

These letters are unusually readable, perceptive, and useful to readers who might wish to explore the motivation of soldiers not only in the Civil War but in comparative contrast with those of all wars."

A Badger Boy in Blue provides a fascinating window into the life of abolitionist midwestern soldier Chauncey H. Cooke. Cooke's letters read like a novel. His eye for detail transforms his descriptions of such mundane experiences as marching and laundry day in camp into fascinating accounts, full of life. The letters recounting battles are heart pounding. Marching off to war with Chauncey Cooke, The Badger Boy in Blue, is an adventure not to be missed."

– Joseph E. Brent, adjunct professor at the University of Kentucky and vice-president of Mudpuppy & Waterdog, Inc.

This remarkable book offers vivid and intimate insights into the Civil War experiences of ordinary soldiers through the richly detailed and poignant letters of Chauncey Cooke. Filled with the sights and sounds of war and a young soldier's wonder and concern, especially on issues of race, what this teenaged farm boy wrote home to western Wisconsin is certain to deepen both your understanding and empathy for those who served in the Union ranks. Also, one is sure to feel a sublime sense of young Cooke's spiritual kinship to Huck Finn."

– Kerry A. Trask, author of Fire Within: A Civil War Narrative from Wisconsin

Characterized as a 'charmingly fresh and unsophisticated' narrative, the experiences of the 25th Wisconsin Infantry as described in the letters of Chauncey Cooke will enthrall and entertain the broad spectrum of Civil War enthusiasts. A Badger Boy in Blue makes for a delightfully good read."

– Terrence J. Winschel, historian at Vicksburg National Military Park and author of Triumph and Defeat: The Vicksburg Campaign, vols. I and II<br /><br />