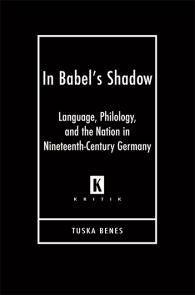 Language, Philology, and the Nation in Nineteenth-Century Germany

Benes has written a book of exceptional importance.

In contrast to fields like anthropology, the history of linguistics has received remarkably little attention outside of its own discipline despite the undeniable impact language study has had on the modern period. In Babel’s Shadow situates German language scholarship in relation to European nationalism, nineteenth-century notions of race and ethnicity, the methodologies of humanistic inquiry, and debates over the interpretation of scripture. Author Tuska Benes investigates how the German nation came to be defined as a linguistic community and argues that the "linguistic turn" in today’s social sciences and humanities can be traced to the late eighteenth century, emerging within a German tradition of using language to critique the production of knowledge.

In this volume, Benes suggests that nineteenth-century philologists interpreted language as evidence of ethnic descent and created influential myths of cultural origin around the perceived starting points of their mother tongue. She argues that the origin paradigm so prevalent in German linguistic thought reinforced the historical and ethnic focus of German nationhood, with important implications for German theologians, cultural critics, philosophers, and racial theorists. In Babel’s Shadow also contextualizes the importance of linguistics to modern cultural studies by arguing that the cultural significance attributed to language in twentieth-century French philosophy dates to the late eighteenth century and has clear precedents in theology. Benes links the German tradition of reflecting on the autonomous powers of language to the work of the fathers of structuralist and poststructuralist thought, Ferdinand de Saussure and Friedrich Nietzsche.

In Babel’s Shadow makes clear that comparative philology helped make language an important model and informing metaphor for other modes of thinking in the modern human sciences. Cultural and intellectual historians, scholars of German language and literature, and linguists will enjoy this illuminating volume.

Tuska Benes is assistant professor of history at the College of William and Mary.

Benes brings about a much-needed merger between accounts of the development of linguistic disciplines in nineteenth-century Germany and broader systems of cultural and political thought, moving back and forth between the view of language as a tool of communication, which ultimately proved 'amenable to structuralism,' and theories of linguistic autonomy, which imagined language as a living force uniting members of the Volk."

In this deeply impressive study, Tuska Benes presents a comprehensive and fascinating account of the development and ramifications of German philological studies. Benes has written a book of exceptional importance. It should be read by anyone interested in the history and culture of nineteenth-century Germany."

Tuska Benes's rich and erudite new work covers more territory than the title might suggest. . . . Benes's work represents a significant intervention in the literature not just on German philology but on the development of German nationhood and of European humanistic culture writ large."

– The Journal of Central European History

This remarkable work synthesizes an astonishingly wide array of secondary literature, mastering different fields of scholarship, while providing groundbreaking new insights by drawing upon close readings of primary sources. . . . The excellent analysis any synthesis in this work will be a boon for researchers, graduate seminars, and advance undergraduate classes."

While many of the individual thinkers Benes explores have been studied elsewhere, there is to my mind no single work that attempts such a broad and well-informed synthesis of German thinking on language. . . . In Babel's Shadow is an impressive accomplishment."

– Jonathan Hess, Moses M. and Hannah L. Malkin Term Professor of Jewish History and Culture and professor of Germanic languages at the University of North Carolina

10 hours 36 min ago
In honor of the #CityofDetroit turning 321 years old on July 24th, WSUPress will be showcasing one Detroit Book of… https://t.co/PA7nONh4C0
15 hours 39 min ago
OUR FALL & WINTER 2022 TITLES ARE NOW AVAILABLE FOR PRE-ORDER! Grab your copy of any of our fall & winter titles f… https://t.co/qDykAsF9sk
2 days 16 hours ago
Happy Pub Date to THE SPOOK WHO SAT BY THE DOOR, SECOND EDITION! This new edition of a literary classic now includ… https://t.co/XrCsLZvf4D