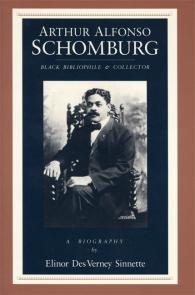 Anyone interested in Afro-American history and culture in this century, or interested in book collecting and libraries in general, will find Dr. Sinnette's study a rewarding, even engrossing experience.

This is the first full biography of the pioneering black collector whose detective work laid the foundation for the study of black history and culture. Born in Puerto Rico in 1874, Arthur Alfonso Schomburg came to New York militantly active in Caribbean revolutionary struggles. He searched out the hidden records of the black experience and built a collection of books, manuscripts, and art that had few rivals. Today it forms the core of the New York Public Library's Schomburg Center for research in Black Culture, one of the leading collections in the field.
At the center of the Harlem Renaissance, Schomburg was a generous friend of many of the writers, artists, performers, collectors, scholars, and political figures who made Harlem the capital of Black America. A contributor to the major black journals of the period, he went on to head the Negro Collection at Fisk University and became curator of his own collection in the New York Public Library until his death in 1938.

Elinor Des Verney Sinnette is Acting Director of Howard University’s Moorland-Spingarn Research Center. A former staff member of The New York Public Library, a teacher of librarians from Central Harlen to Nigeria and Kenya, a consultant to UNESCO, Dr. Sinnette has long been a contributor to the study of the history and culture of black people throughout the world.

Anyone interested in Afro-American history and culture in this century, or interested in book collecting and libraries in general, will find Dr. Sinnette's study a rewarding, even engrossing experience.

– Arnold Rampersad, Sara Hart Kimball Professor in the Humanities and cognizant dean for the humanities at Stanford University

In her informed and highly readable portrait of Arthur Schomburg, Elinor Sinnette has captured the spirit and tenacity of the man totally dedicated to putting the work of Black writers and thinkers on the literary map of the world.

– Paule Marshall, is an American author