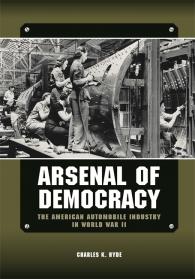 Throughout World War II, Detroit's automobile manufacturers accounted for one-fifth of the dollar value of the nation's total war production, and this amazing output from "the arsenal of democracy" directly contributed to the allied victory. In fact, automobile makers achieved such production miracles that many of their methods were adopted by other defense industries, particularly the aircraft industry. In Arsenal of Democracy: The American Automobile Industry in World War II, award-winning historian Charles K. Hyde details the industry's transition to a wartime production powerhouse and some of its notable achievements along the way.

Hyde examines several innovative cooperative relationships that developed between the executive branch of the federal government, U.S. military services, automobile industry leaders, auto industry suppliers, and the United Automobile Workers (UAW) union, which set up the industry to achieve production miracles. He goes on to examine the struggles and achievements of individual automakers during the war years in producing items like aircraft engines, aircraft components, and complete aircraft; tanks and other armored vehicles; jeeps, trucks, and amphibians; guns, shells, and bullets of all types; and a wide range of other weapons and war goods ranging from search lights to submarine nets and gyroscopes. Hyde also considers the important role played by previously underused workers-namely African Americans and women-in the war effort and their experiences on the line.

Arsenal of Democracy includes an analysis of wartime production nationally, on the automotive industry level, by individual automakers, and at the single plant level. For this thorough history, Hyde has consulted previously overlooked records collected by the Automobile Manufacturers Association that are now housed in the National Automotive History Collection of the Detroit Public Library. Automotive historians, World War II scholars, and American history buffs will welcome the compelling look at wartime industry in Arsenal of Democracy.

Arsenal of Democracy will surprise and educate those of us for whom Rosie the Riveter has always implied a smooth, patriotic, even happy transformation of industry in the nation’s interests.

Hyde's well-researched volume will enlighten serious students of the war...

Heavily researched and scrupulously presented... Extensive notes and an index round out this excellent addition to military and World War II history shelves.

The American automobile industry's rapid conversion from civilian to military production was one of the keys to Allied victory in World War II. In retrospect that conversion appears smooth and seamless. Charles K. Hyde demonstrates that it was in fact fraught with many technical, political, and social challenges. Arsenal of Democracy is an engaging portrait of what was arguably the auto industry's 'finest hour.'

The book clearly shows the enormous impact of WWII and the auto industry's essential role. There would have been no victory without the arsenal. Summing up: Highly recommended.

This well-written book is one of the most important studies of industrial mobilization to appear in a long time. . . In addition to anyone interested in the history of industrial Michigan, this study should appeal to historians of technology, business, and the US war economy who have long waited for a comprehensive portrait of the automobile industry in World War II.

Many people have written about war production in World War II, but Hyde stands among the few who teach us new things about how it worked.

American manufacturing prowess is on full display in this masterful study of automobile makers and parts suppliers who shifted gears to achieve miracles of military production in World War II. Hyde proves that modern wars are won not just on battlefields but also on assembly lines and shop floors.

3 hours 19 min ago
THE FORGOTTEN IRON KING OF THE GREAT LAKES by Michael Nagle is a biography about a Gilded Age industrialist who bec… https://t.co/IPgcetjlui
23 hours 48 min ago
HAPPY NATIONAL BOOK LOVERS DAY! In celebration of today, comment your current favorite book or something that you… https://t.co/SqfUAeiLHy
1 day 2 hours ago
QUEERING ANTI-ZIONISM by Corinne E. Blackmer is a queer critique of anti-Zionism, exploring how the Boycott, Divest… https://t.co/jk8OUUN7ku