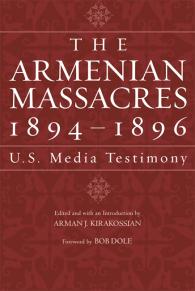 Edited and with an Introduction by Arman J. Kirakossian
Foreword by Bob Dole

This is an important contribution to the growing scholarly appreciation and documentation of the long, but little studied, history of relations between the American and Armenian peoples based on the principle of values and humanitarian concern.

The 1915 massacre of the Armenians by reactionary Ottoman Government foreshadowed a horrifying trend of genocide that would characterize much of the twentieth century. Yet not so much is known about the Armenian massacres of the 1890s and how they set the stage for the events of 1915. This compilation of articles, published in the U.S. periodicals between 1895 and 1899, reflects the deep concern of the American public for the Armenian people, and also offers a fascinating window onto the world politics of the time—especially on the challenges of coordinating international action once news of the massacres began to emerge.

Throughout these thirty-five reprinted articles, written by American diplomats, missionaries, journalists, religious and public figures, and scientists, the plight of the Armenian people unfolds. Not only do readers learn of the Armenian struggle for equality and, ultimately, independence from the Ottoman Empire, but they also discover rich evidence about the Armenians themselves, their Church, instabilities within the Empire, and charitable efforts spearheaded by American Christian missionaries. The language and tone of these articles from over a century ago do reflect U.S. and European attitudes of the time, which were influenced by the perception of the Empire’s Sultan Abdul Hammid II as the ultimate anti-Christian, pan-Islamic Ottoman ruler. But the overall humanitarian impulses of these writers are evident, and we see the beginnings of an Armenian-U.S. relationship that would strengthen over the course of the twentieth century.

Unlike collections of cursory newspaper accounts, this illuminating volume brings together substantial and mostly analytical articles culled from American periodicals of the 1890s. The reader will hear the compassionate voices of solicitous American public figures protesting against the premeditated massacres of the mid-1890s in the Ottoman Empire, a cold-blooded policy which was a little later to be adopted by the Young Turks in its most radical and brutal form. These writings at the time echoed and in large measure shaped American public opinion, which demanded effective action to stop Abdulhamid's murderous anti-Armenian policy, but was faced with disappointing inaction on the part of the architects of American foreign policy on the Middle East. Dr. Kirakossian's incisive introduction and meticulous annotation place these writings in their proper context and help the reader understand these at times passionate views, expressed by indignant public figures, who were appalled by the indiscriminate and ruthless nature of the Armenian massacres of the 1890s."

Ambassador Kirakossian has done the field of Armenian studies (and the study of the Ottoman Empire and the Middle East more broadly) a great service by compiling articles from the American press of the 1890s dealing with the then-vital Armenian Question. The sad record of Ottoman government over their Armenian subjects was of great concern to American diplomats, missionaries, and journalists, and here the views of leading public intellectuals of the day illuminate both the tragic and heroic sides of Armenian life in the years before the Genocide."

The abundant American diplomatic and journalistic record of the 1915 Armenian Genocide has overshadowed the accounts of the 1894–1896 massacre of Armenians in the Ottoman Empire. This compilation of published reports from that era remind us of the extent of those precursor atrocities and the public indignation registered in the United States. Arman Kirakossian, who has assiduously prepared this compilation, persuasively traces American interest in the Armenian Question and in the fate and treatment of the Christian Armenians to these critical years at the end of the nineteenth century. This is an important contribution to the growing scholarly appreciation and documentation of the long, but little studied, history of relations between the American and Armenian peoples based on the principle of values and humanitarian concern."

2 weeks 21 hours ago
Wayne State University Press is excited to announce the redesign of our TV Milestones Series! For more info on the… https://t.co/t5iKM1qXje
3 weeks 15 min ago
Hey @waynestate Warriors! Don't forget to show your One Card and save 30% off your order at @WSUPress! Details a… https://t.co/dVkj0eylOc
1 month 1 week ago
RT @waynestatealum: Joseph Harris (@PrinceLanzen) is a 2013 @WayneStateCLAS alum. His debut book, You’re in the Wrong Place, was publis… https://t.co/tPMo8Hs5vi