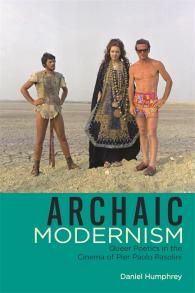 Queer Poetics in the Cinema of Pier Paolo Pasolini

In Archaic Modernism, Daniel Humphrey offers the first book-length, English-language examination of three adaptations of Greek tragedy produced by the gay and Marxist Italian filmmaker Pier Paolo Pasolini: Oedipus Rex (1967), Medea (1969), and Notes Towards an African Orestes (1970/1973). Considering Pasolini’s own theories of a "Cinema of Poetry" alongside Jacques Derrida’s concept of écriture, as well as more recent scholarship by queer theory scholars advocating for an antirelational and antisocial subjectivity, Humphrey maintains that Pasolini’s Greek tragedy films exemplify a paradoxical sense of "archaic modernism" that is at the very heart of the filmmaker’s project. More daringly, he contends that they ultimately reveal the queer roots of Western civilization’s formative texts.

Archaic Modernism is comprised of three chapters. Chapter 1 focuses on Oedipus Rex, assessing both the filmic language employed and the deeply queer mythological source material that haunts the tragedy even as it remains largely at a subtextual yet palpable level. Chapter 2 extends and deepens the concept of queer fate and queer negativity in a scene-by-scene analysis of Medea. Chapter 3 looks at the most obscure of Pasolini’s feature length films, Notes Towards an African Orestes, a film long misunderstood as an unwitting failure, but which could perhaps best be understood as a deliberate, sacrificial act on the filmmaker’s part. Considering the film as the third in an informal, maybe unconscious, trilogy, Humphrey concludes his monograph by arguing that this "trilogy of myth" can best be understood as a deconstruction, gradually more and more severe, of three of the most important origin tales of Western civilization.

Archaic Modernism makes the case that these three films are as essential as those Pasolini films more often studied in the Anglophone world: Mamma Roma, The Gospel According to Matthew, Teorema, The Trilogy of Life, and Salò, and that they are of continuing, perhaps even increasing, value today. This book is of specific interest to scholars, students, and researchers of film and queer studies.

Daniel Humphrey is associate professor of film studies and women’s and gender studies as well as the coordinator of the film studies program at Texas A&M University. He is the author of Queer Bergman: Gender, Sexuality and the European Art Film and articles in Criticism, Screen, GLQ, Post Script, Invisible Culture, and elsewhere.

Daniel Humphrey introduces us to Oedipus Rex, Medea, and Notes Toward an African Orestes as if Pasolini had made these films in the ancient world, as if cinema were an archaic, forgotten art of which only strange fragments can be found, and an uncanny prequel to the actual Greek tragedies.

In this sophisticated and provocative study, Humphrey rereads Pasolini’s undercelebrated ‘Trilogy of Myth’ to reveal a queer poetics that is central to the filmmaker’s work. Lucidly written and beautifully illustrated, Archaic Modernism animates the films with vibrant arguments about psychoanalysis, queer theory, authorship, Orientalism, and Third Cinema.

Finally, Daniel Humphrey has given us the Pasolini we need, showing how his famous ‘cinema of poetry’ was a queer theory avant la lettre. Focusing on three of Pasolini’s most complex and least-discussed films, Humphrey’s brilliant readings reveal the most thrilling Pasolini—perverse and irrecuperable by liberal logics of progress or identity. Pasolini’s queerness, at the heart of his poetics, lies in the tension between the archaic and the modern, and his films reveal how the force of heterocentric law rests on the disavowal of its own, inevitable, queer undoing.

In Humphrey’s ingenious formulation, the three films that Pasolini adapted from classical Greek sources constitute an unrecognized ‘Trilogy of Myth.’ When examined in tandem, these adaptations illuminate the relentless collision of the primitive and the modern underlying all Pasolini’s films. The result is an aesthetics—and ethics—of ‘archaic modernism’ that not only destabilizes cinematic verisimilitude but visualizes a radical queerness that is world-shattering. The close analysis of Medea is a tour de force.

Elucidating what is perhaps the most demanding of cinematic practices, Humphrey employs the critical tools of queer theory with great insight. Pasolini’s complex and seldom seen ‘mythic trio’ provides the occasion for a subtle and ambitious engagement with a range of theoretical perspectives, grounded in the author’s keen interest in textual form. An impressive work.

Few filmmakers challenge us as Pier Palolo Pasolini does. His films contain deep contradictions and Pasolini refuses to resolve them for us. Daniel Humphrey’s Archaic Modernism grapples with these contradictions to great effect, offering elegant, lucid, and compelling explanations for why Pasolini matters so persistently in his engagements with cinema, politics, sexuality, and history.

Pier Paolo Pasolini has often presented a stumbling block for critics and audiences alike, given his controversial film theory, his eccentric formal practices, his troubled relationship to the Italian Left, and his unapologetic homosexuality. In this fascinating and ambitious study, Daniel Humphrey is able to show the necessary—indeed, structural—relationship between those things. Humphrey’s analyses of three lesser-studied works of Pasolini pay nuanced attention to the transgressive formal systems of the films, in the process making important contributions to current debates about queer futurity, queer spectatorship, postcolonial filmmaking, and the ethnographic impulse in the art cinema of the 1960s.

This is a fine book, and one hopes that Humphrey will do a second on Pasolini's last four films.

3 hours 50 min ago
Happy Pub Date to THE SPOOK WHO SAT BY THE DOOR, SECOND EDITION! This new edition of a literary classic now includ… https://t.co/XrCsLZvf4D
3 hours 54 min ago
RT @DarkProjections: Returned from a great two weeks in Europe to find copies of my new book! Kolchak:The Night Stalker, one of the Pion… https://t.co/kPJ5kKLRyr
1 day 50 min ago
RT @oneitadetroit: Thrilled that @WSUPress is releasing the 2E of Sam Greenlee's "The Spook Who Sat by the Door" tomorrow. Introductio… https://t.co/hZpAjxluIl