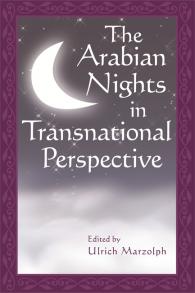 The Arabian Nights in Transnational Perspective

The essays are insightful and illuminating, and the collection itself is a valuable addition to the comparative study of literary translation and the intra- and intercultural responses that it provokes. The editor and authors are to be congratulated.”

Essays are arranged in five sections. The first section contains essays on Galland’s translation and its "continuation" by Jacques Cazotte. The second section treats specific characteristics of the Nights, including manuscript tradition, the transformations of a specific narrative pattern occurring in the Nights and other works of medieval Arabic literature, the topic of siblings in the Nights, and the political thought mirrored in the Nights. The essays in the third section deal with framing in relation to the classical Indian collection Panchatantra and as a general cultural technique, with particular attention to storytelling in the oral tradition of the Indian Ocean islands off the African coast. The two concluding and largest sections focus on various aspects of the transnational reception of the Nights. While the essays of the fourth section predominantly discuss written or learned tradition in Hawai‘i, Swahili-speaking East Africa, Turkey, Iran, German cinema, and modern Arabic literature, the fifth section encompasses essays on the reception and role of the Nights in the oral tradition of areas as wide apart as Sicily, Greece, Afganistan, and Balochistan. A preface by Ulrich Marzolph unifies this volume.

In view of the tremendous impact of the Arabian Nights on Western creative imagination, this collection will appeal to literary scholars of many backgrounds.

All of the articles are interesting and well-organized, and as a whole they avoid tedious duplication. One of the recurrent findings of recent studies of the Arabian Nights is that this collection often inspires its compilers, translators, and even scholars to participate in its tradition by improving, elaborating, retelling, or adding new material. Its powers of inspiration are evident in this collection of scholarship as well."

This volume of nineteen essays is a noteworthy and fascinating contribution to our understanding of the Arabian Nights and its cross-cultural history and influence. The essays are insightful and illuminating, and the collection itself is a valuable addition to the comparative study of literary translation and the intra- and intercultural responses that it provokes. The editor and authors are to be congratulated."

– Peter Heath, provost of the American University of Beirut

This book celebrates the truly global reach of the Arabian Nights over the centuries. The contributors-a gathering of some of the most creative literary critics and textual scholars active today-trace the presence of the Nights in settings as diverse as Sicilian folklore, Hawaiian newspapers, German cinema, Greek oral traditions, and Swahili-language story collections of East Africa."

– David Pinault, associate professor of religious studies at Santa Clara University and author of Story-Telling Techniques in the Arabian Nights