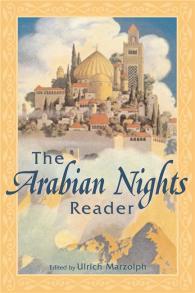 The first comprehensive collection of essays to bring together some of the most significant scholarship on The Arabian Nights, this collection sheds new light on the significance of those wonderful tales that continue to entrance us.

The Arabian Nights commands a place in world literature unrivaled by any other fictional work of "Oriental" provenance. Bringing together Indian, Iranian, and Arabic tradition, this collection of tales became popular in the Western world during the eighteenth century and has since exerted a profound influence on theater, opera, music, painting, architecture, and literature. The Arabian Nights Reader offers an authoritative guide to the research inspired by this rich and intricate work. Through a selection of sixteen influential and currently relevant essays, culled from decades of scholarship, this volume encompasses the most salient research topics to date, from the Nights' early history to interpretations of such famous characters as Sheherazade.

While serious research on the Nights began early in the nineteenth century, some of the most puzzling aspects of the collection's complex history and character were solved only quite recently. This volume's topics reflect the makings of a transnational narrative: evidence of a ninth-century version of the Nights, the work's circulation among booksellers in twelfth-century Cairo, the establishment of a "canonical" text, the sources used by the French translator who introduced the Nights to the West and the dating of this French translation, the influence of Greek literature on the Nights, the genre of romance, the relationship between narration and survival within the plots, reception of the Nights from the nineteenth century onward, interpretations of single stories from the collection, the universal nature of the sexual politics surrounding Sheherazade, and the repercussion of the Nights in modern Arabic literature.

As this collection demonstrates, the Arabian Nights helped shape Western perceptions of the "Orient" as the quintessential "Other" while serving to inspire Western creativity. The research presented here not only deepens our insight into this great work but also heightens our awareness of the powerful communal forces of transnational narrative.

Every article is valuable; all are interesting to read; together, they mark a major contribution to an understanding of a major work of world literature, which depends on folklore for both techniques and themes."

Not since Victor Chauvin and René Basset has a scholar done more for the study of Arabic and Islamic folk literature than Ulrich Marzolph. The Arabian Nights Reader offers an interdisciplinary bird's-eye view of distinguished scholarship that will intrigue both the specialist and the novice."

– Hasan El-Shamy, professor of folklore, Near Eastern languages and civilization, and African studies at Indiana University and author of A Motif Index of The Thousand and One Nights

Ulrich Marzolph's The Arabian Nights Reader is essential reading for anyone interested in understanding the most famous Oriental collection of fairy tales in the world. Marzolph's informative introduction provides the framework for these essays, published by some of the best scholars in the field between 1949 and the present. The first comprehensive collection of essays to bring together some of the most significant scholarship on The Arabian Nights, this collection sheds new light on the significance of those wonderful tales that continue to entrance us."

– Jack Zipes, professor of German at the University of Minnesota and author of Why Fairy Tales Stick: The Evolution and Relevance of a Genre

An invaluable resource for reading and teaching the Nights. This collection brings together essential commentary and criticism in English from the last sixty years, illuminating both for the study of the Arabic original and to understand the reception of this classic in translation by Euro-American literary historians and creative writers."

– Margaret Mills, professor of Near Eastern languages and cultures at Ohio State University and author of Rhetorics and Politics in Afghan Traditional Storytelling