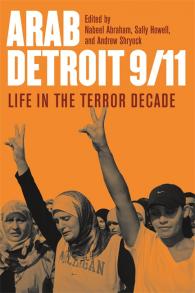 Life in the Terror Decade

The editors have assembled an outstanding, must-read volume.

Since the terrorist attacks of September 11, 2001, Detroit's large and nationally prominent Arab and Muslim communities have faced heightened prejudice, government surveillance, and political scapegoating, yet they have also enjoyed unexpected gains in economic, political, and cultural influence. Museums, festivals, and cultural events flourish alongside the construction of new mosques and churches, and more Arabs are being elected and appointed to public office. Detroit's Arab population is growing even as the city's non-Arab sectors, and the state of Michigan as a whole, have steadily lost population. In Arab Detroit 9/11: Life in the Terror Decade, a follow-up to their volume Arab Detroit: From Margin to Mainstream (Wayne State University Press, 2000), editors Nabeel Abraham, Sally Howell, and Andrew Shryock present accounts of how life in post-9/11 Detroit has changed over the last ten years.

Abraham, Howell, and Shryock have assembled a diverse group of contributors whose essays range from the scholarly to the artistic and include voices that are Palestinian, Iraqi, Yemeni, and Lebanese; Muslim and Christian; American born and immigrant. The book is divided into six sections and begins with wide-angle views of Arab Detroit, looking first at how the community fits within greater Detroit as a whole, then presenting closer portraits of Arab Detroit's key ethnonational and religious subgroups. More personal, everyday accounts of life in the Terror Decade follow as focus shifts to practical matters such as family life, neighborhood interactions, going to school, traveling domestically, and visiting home countries. Finally, contributors consider the interface between Arab Detroit and the larger society, how this relationship is maintained, how the War on Terror has distorted it, and what lessons might be drawn about citizenship, inclusion, and exclusion by situating Arab Detroit in broader and deeper historical contexts.

In Detroit, new realities of political marginalization and empowerment are evolving side by side. As they explore the complex demands of life in the Terror Decade, the contributors to this volume create vivid portraits of a community that has fought back successfully against attempts to deny its national identity and diminish its civil rights. Readers interested in Arab studies, Detroit culture and history, transnational politics, and the changing dynamics of race and ethnicity in America will enjoy the personal reflection and analytical insight of Arab Detroit 9/11.

Nabeel Abraham is professor of anthropology and director of the Honors Program at Henry Ford Community College. He is also the editor of Arab Detroit: From Margin to Mainstream (Wayne State University Press, 2000).

Sally Howell is assistant professor of history and Arab American studies at the University of Michigan-Dearborn. Her essays have appeared in Diaspora, Visual Anthropology, and Anthropological Quarterly. As a member of the Detroit Arab American Study Team, she is also co-author of Citizenship and Crisis: Arab Detroit after 9/11.

Andrew J. Shryock is Arthur F. Thurnau Professor of Anthropology at the University of Michigan. He is the author of Nationalism and the Genealogical Imagination: Oral History and Textual Authority in Tribal Jordan and editor of several volumes, including Arab Detroit: From Margin to Mainstream (Wayne State University Press, 2000) and Islamophobia/Islamophilia: Beyond the Politics of Enemy and Friend.

Arab Detroit 9/11 makes a superior contribution to the field of Arab American studies. The volume is timely and necessary and fills an enormous gap in the literature of how Arab Americans react to, live with, and are perceived because of the horror of 9/11. It is a primer on ethnogenesis, identity development, and the effects that changing sociohistorical circumstances have on ethnic group continuity, acceptance, and social integration."

Arab Detroit 9/11 offers a balanced, engaging, and comprehensive account of how the post-9/11 backlash has transformed 'the capital of Arab America.' This interdisciplinary volume examines how a vibrant and highly diverse ethnic community has confronted the unique challenges of the 'Terror Decade' and occasionally even turned them into new opportunities."

Major shifts in populations and politics are documented in this follow-up to the earlier classic, Arab Detroit. The editors and contributors make Detroit's Arabs visible in new ways, many of them as Muslim Arabs linked to other Muslims and all of them as citizens struggling for respect and recognition. The volume argues compellingly that, for Arabs and Muslims in the U.S. today, the discipline imposed by inclusion is as significant as the challenge posed by exclusion from full citizenship."

– Karen Leonard, professor and chair of anthropology, University of California-Irvine

Arab Detroit 9/11 is a multi-faceted jewel. Its essays, situated in demographic and historical context, are written by deeply placed scholars and ardent observers, offering both scholarly and highly personal perspectives on the ways in which institutional, communal, familial, and personal lives, both public and private, were transformed by the contradictory agendas of a range of powerful actors in the decade after 9/11."

The writing is clear and compelling. In chapters on the history of the community in Detroit featuring interviews with residents, demographics, and reflections by Christians and Muslims, the editors have assembled an outstanding, must-read volume.

This book is a valuable and unique work at this time of growing intolerance due primarily to foreign political events. The articles are scholarly and truly engaging. Arab Detroit 9/11 should be used extensively in school and university classes and read by the general public. It has obvious importance for Michigan as well.

The writing is clear and compelling. In chapters on the history of the community in Detroit featuring interviews with residents, demographics, and reflections by Christians and Muslims, the editors have assembled an outstanding, must-read volume.

– A. B. McCloud, DePaul University, for CHOICE

1 hour 51 min ago
THE FORGOTTEN IRON KING OF THE GREAT LAKES by Michael Nagle is a biography about a Gilded Age industrialist who bec… https://t.co/IPgcetjlui
22 hours 19 min ago
HAPPY NATIONAL BOOK LOVERS DAY! In celebration of today, comment your current favorite book or something that you… https://t.co/SqfUAeiLHy
1 day 1 hour ago
QUEERING ANTI-ZIONISM by Corinne E. Blackmer is a queer critique of anti-Zionism, exploring how the Boycott, Divest… https://t.co/jk8OUUN7ku