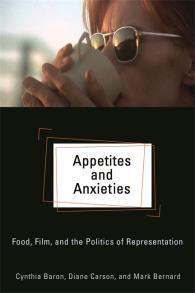 Food, Film, and the Politics of Representation

Cinema is a mosaic of memorable food scenes. Detectives drink alone. Gangsters talk with their mouths full. Families around the world argue at dinner. Food documentaries challenge popular consumption-centered visions. In Appetites and Anxieties: Food, Film, and the Politics of Representation, authors Cynthia Baron, Diane Carson, and Mark Bernard use a foodways paradigm, drawn from the fields of folklore and cultural anthropology, to illuminate film's cultural and material politics. In looking at how films do and do not represent food procurement, preparation, presentation, consumption, clean-up, and disposal, the authors bring the pleasures, dangers, and implications of consumption to center stage.

In nine chapters, Baron, Carson, and Bernard consider food in fiction films and documentaries-from both American and international cinema. The first chapter examines film practice from the foodways perspective, supplying a foundation for the collection of case studies that follow. Chapter 2 takes a political economy approach as it examines the food industry and the film industry's policies that determine representations of food in film. In chapter 3, the authors explore food and food interactions as a means for creating community in Bagdad Café, while in chapter 4 they take a close look at 301/302, in which food is used to mount social critique. Chapter 5 focuses on cannibal films, showing how the foodways paradigm unlocks the implications of films that dramatize one of society's greatest food taboos. In chapter 6, the authors demonstrate ways that insights generated by the foodways lens can enrich genre and auteur studies. Chapter 7 considers documentaries about food and water resources, while chapter 8 examines food documentaries that slip through the cracks of film censorship by going into exhibition without an MPAA rating. Finally, in chapter 9, the authors study films from several national cinemas to explore the intersection of food, gender, and ethnicity.

Four appendices provide insights from a food stylist, a selected filmography of fiction films and a filmography of documentaries that feature foodways components, and a list of selected works in food and cultural studies. Scholars of film studies and food studies will enjoy the thought-provoking analysis of Appetites and Anxieties.

Cynthia Baron is the author of Denzel Washington. She is also co-author of Reframing Screen Performance and co-editor of More Than a Method: Trends and Traditions in Contemporary Film Performance (Wayne State University Press, 2004).

Mark Bernard is the author of Selling the Splat Pack: The DVD Revolution and the American Horror Film and co-author of a forthcoming book on horror film performance and cult reception.

This superlatively researched, well-written volume puts the genre of food films on the scholarly map but also makes excellent reading for those outside the academy, including average ‘foodies.’ Using the conceptual and critical lens of the ‘foodways’ paradigm, the authors convincingly argue that food films—from successful commercial movies to low-budget documentaries and independents—explore the politics of gender, race, ethnicity, class, sexuality, culture, and community through their characters’ interactions with food, whether haute cuisine or far less appetizing concoctions. Special attention is paid to selected films and auteurs, as well as the contributions of food stylists and the role of product placements in contemporary movies.

Alongside delicious scenes of food production and consumption, Appetites and Anxieties considers cannibal films, product placement, food documentaries, and dystopic images of food to consider film’s role in alternately masking and revealing the prickly politics of food. A highly readable and teachable addition to the growing field of food studies.

– Pamela Robertson Wojcik, director of gender studies and professor of film at the University of Notre Dame

The topic is timely. The writing style is lucid and convincing, with the volume offering a wealth of material for the uninitiated, highlighting an area of film studies that will undoubtedly increase in importance as the general interest in food, from cooking as a recreational activity to health implications and environmental issues, continues to grow.

[. . .] akin to a well-rounded meal (peas and all), and a significant addition to our understanding of how food is represented in cinema.

[. . .] fulfills its goal in leaving the reader satiated.

Baron, Carson, and Bernard have collaborated to construct a rich but lively exposition of how foodways elevate the study of food film to a level of greater sophistication and penetrating insight.

[. . .] a worthwhile read for those interested in the film industry and the history of documentaries, political economy, or foodways. The book is a fine contribution to the food in films genre.

5 hours 57 min ago
Happy Pub Date! HOUSE AND HOME is a collection of poems that intensely explore the beauty & wisdom to be found in w… https://t.co/MYnkKJxcrx
2 days 8 hours ago
Join WSU President M. Roy Wilson for a book talk next Wednesday! Copies of his memoir will be available for sale a… https://t.co/6q5w5dtFtu
4 days 8 hours ago
TONIGHT! Join @stephanie_heit at @ShopBooksweet for local author's night! https://t.co/pTny5OErDe