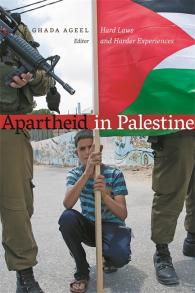 "Of all the crimes to which Palestinians have been subjected through a century of bitter tragedy, perhaps none are more cruel than the silencing of their voices. The suffering has been most extreme, criminal and grotesque, in Gaza, where Ghada Ageel was one of the victims from childhood. This collection of essays is a poignant cry for justice, far too long delayed." —Noam Chomsky

There are more than two sides in the conflict between Palestine and Israel. There are millions. Millions of lives, voices, stories behind the enduring struggle in Israel and Palestine. Yet, the easy binary of Palestine vs. Israel so often relied upon for context in media reports effectively silences the multitudinous lived experience at the heart of this strife. Ghada Ageel sought leading experts from the margins—Palestinian and Israeli, academic and activist—to gather stories that humanize the historic processes of occupation, displacement, colonization, and, most controversially, apartheid. Historians, scholars and students of colonialism and Israel-Palestine studies, and anyone interested in more nuanced debate, will want to read this book.