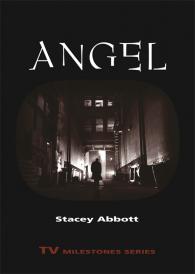 With this short TV Milestones volume, Abbott continues to make a strong case for Angel as televisual art. In my brief reviewer's space, I do not have enough room to fully praise Abbott's impressive book.

Following the phenomenal success of the first three seasons of Buffy the Vampire Slayer on the WB Network, writers and producers Joss Whedon and David Greenwalt moved their character Angel to his own spin-off series in 1999. While Angel, which followed its namesake vampire with a soul who had become Buffy’s tragic love interest, never quite matched the popularity of Buffy, the spin-off was notable for being specifically aimed at adult audiences and acquiring an intensely loyal following. In this in-depth study of Angel, Stacey Abbott demonstrates that producers of the show used the commercial convention of the spin-off not simply to repeat Buffy’s successful formula but to create a complex televisual experience with its own distinct identity and creativity.

Through close textual analysis of a range of individual episodes, this volume focuses on the series’ unique visual style and the ways it experiments with the conventions and form of television programming. Abbott clearly situates Angel within traditions of the horror genre on television and in so doing addresses how the horror genre has evolved to suit the changing landscape of contemporary television. She also challenges the tendency to attribute the success of contemporary cult television to a sole auteur by examining the contribution of Angel’s writing team and addressing how contemporary television is characterized by a collective creativity. Finally, while there has been a vast amount of scholarly interest in Angel’s parent show in terms of feminist issues, this volume positions Angel as a key text within gender and feminist studies that offers a clever deconstruction of contemporary masculinity.

In all, Abbott argues that Angel uses narrative, genre, visual style, and theme to create an ambiguous moral landscape in which characters struggle to negotiate the correct path when the consequences of their actions are unknown. Fans of Angel and students and scholars of film and television studies will enjoy this thought-provoking analysis of the series.

Stacey Abbott is senior lecturer in film and TV studies at Roehampton University and author of Celluloid Vampires, editor of Reading Angel: The TV Spin-off with a Soul, and general editor for I. B. Tauris’s Investigating Cult TV Series.

In this TV Milestones entry, Stacey Abbott, the premier scholar of Angel Studies, applies her broad understanding of film and television through brilliantly detailed analysis of the series, illuminating the beautiful darkness of Angel. Abbott has written a book that is both careful scholarship and also a page-turner-lucid, lively, perceptive. Readers will want to watch the series-or watch it again-with the understanding gained from this remarkable little book."

– Rhonda V. Wilcox, professor of English at Gordon College and author of Why Buffy Matters: The Art of Buffy the Vampire Slayer

Always incisive and engaging, Abbott situates Angel in a range of illuminating contexts, from the workings of the twenty-first century television industry to the cinematic qualities of recent small-screen fictions. The scholarly Champion of Angel delivers essential reading on vital debates within TV studies. And on giant tentacle spew."

– Lorna Jowett, senior lecturer in media and American studies at the University of Northampton and author of Sex and the Slayer: A Gender Studies Primer for the Buffy Fan

With this short TV Milestones volume, Abbott continues to make a strong case for Angel as televisual art. In my brief reviewer's space, I do not have enough room to fully praise Abbott's impressive book."