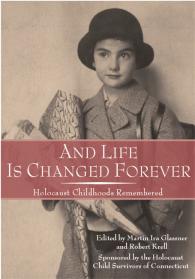 And Life Is Changed Forever

In the canon of first-person Holocaust narratives, this is a book that will not soon be forgotten.

This distinctive volume contains twenty first-person narrative essays from Holocaust survivors who were children at the time of the atrocity. As children aged two to sixteen, these authors had different experiences than their adult counterparts and also had different outlooks in understanding the events that they survived.

While most Holocaust memoirs focus on one individual or one country, And Life Is Changed Forever offers a varied collection of compelling reflections. The survivors come from Germany, Poland, Austria, Romania, Hungary, Italy, Greece, France, the Netherlands, Belgium, Latvia, and Czechoslovakia. All of the contributors escaped death, but they did so in myriad ways. Some children posed as Gentiles or were hidden by sympathizers, some went to concentration camps and survived slave labor, some escaped on the Kindertransports, and some were sent to endure hardships in a "safe" location such as Siberia or unoccupied France. While each essay is intensely personal, all speak to the universal horrors and the triumphs of all children who have survived persecution. And Life Is Changed Forever also focuses on what these children became-teachers, engineers, physicians, entrepreneurs, librarians, parents, and grandparents-and explores the impact of the Holocaust on their later lives.

Martin Ira Glassner is a retired professor of geography and political science and a former foreign service officer. He is currently a lecturer and consultant living in Connecticut.

Robert Krell is professor emeritus of psychiatry at the University of British Columbia and a researcher and therapist specializing in child survivors, of which he is one.

A rare and most important contribution to the field of Holocaust studies. This remarkable compilation of autobiographies of those who survived genocidal persecution as children is a living testimony to resilience and generativity under the most unspeakable conditions. Robert Krell, Martin Glassner, and the Holocaust Child Survivors of Connecticut remind us that the legacy of the youngest survivors of the Shoah is the triumph over Hitler's 'final solution.'"

– Ira Brenner, Jefferson Medical College, co-author of The Last Witness: The Child Survivor of the Holocaust

Gripping memoirs of lost childhoods spent in hiding. Stories of fear, panic, rage, self-blame, of bonding and loss many times over. Inspiring accounts of the human resiliency that triumphed over denial and grief, and led to productive post-war lives."

In the canon of first-person Holocaust narratives, this is a book that will not soon be forgotten."

The importance of personal testimony has become an established principle across cultures and academic disciplines as well as in the field of mental health. But adult memories of traumatic childhoods continue to constitute a controversial issue. This collection, compiled by Martin Glassner, of memoirs of Holocaust child survivors covers a wide range of countries (including prewar Jewish life in Greece and Italy), and commentary by child psychiatrist and child survivor Robert Krell makes it an unusual addition to both the Holocaust and trauma literature."

– Helen Epstein, author of Where She Came From: A Daughter's Search for her Mother's History

1 day 3 hours ago
Happy Pub Date to THE SPOOK WHO SAT BY THE DOOR, SECOND EDITION! This new edition of a literary classic now includ… https://t.co/XrCsLZvf4D
1 day 3 hours ago
RT @DarkProjections: Returned from a great two weeks in Europe to find copies of my new book! Kolchak:The Night Stalker, one of the Pion… https://t.co/kPJ5kKLRyr
2 days 53 min ago
RT @oneitadetroit: Thrilled that @WSUPress is releasing the 2E of Sam Greenlee's "The Spook Who Sat by the Door" tomorrow. Introductio… https://t.co/hZpAjxluIl