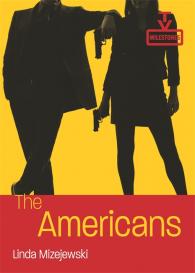 Based on the actual KGB strategy of planting "illegals" into American life during the Cold War, The Americans (FX 2013–2018) focuses on Philip and Elizabeth Jennings (Matthew Rhys and Kerri Russell), Soviet spies posing as middlebrow travel agents in the Virginia suburbs. Groundbreaking and unsettling, The Americans spins its stories of espionage, violence, and politics around narratives of marriage, romance, bromance, and family. Exploring the series’ bold merger of the spy genre and domestic melodrama, author Linda Mizejewski focuses on the characters and relationships that made this series memorable: the extraordinary women who defy the femme fatale stereotype of the spy genre, the conflicted men, and perhaps most shockingly, the children who are both victims and provocateurs

Do viewers of this Cold War thriller root for "the good guys"—the American agents in pursuit of the Jennings—or for the Jennings themselves, the attractive couple whose personal stories compel us even as they plot the takedown of the United States? Mizejewski argues for the importance of The Americans’ portrayal of 1980s suburban life as a microcosm of the moral complexities of citizenship and national identity. Drawing on television studies and feminist media theory, this book examines the series’ seamless loop of espionage violence and family melodrama, as well as its savvy uses of 1980s pop culture and music. Far from invoking nostalgia, the replication of the 1980s "look" invokes uncertainties about how, exactly, we should see Reagan’s America and the Cold War. Yet the appeal of this series rests on solid footing in the Americanism it both critiques and espouses. Mizejewski examines The Americans’ struggles with this ambiguity and with the contradictions of identity, gender, marriage, and the meanings of home.

Everyone from scholars and students of television and media studies, genre studies, gender and sexuality studies, and popular culture, to superfans who can’t believe the show is over will revel in this highly approachable and fun read.

Mizejewski reads The Americans as a domestic melodrama that negotiates the terrain of the real and the ‘real.’ It is
an incisive analysis informed by her immersion in all aspects of ’80s history and culture."

While The Americans has earned its place in television history as a phenomenal spy show, Linda Mizejewski
demonstrates, in a series of compelling and lucid arguments, how its originality is indebted to its particular
orchestration of elements from domestic family melodrama, including its portrayal of gender, family, children, and
the nation. In exploring the intersection of the spy genre and family melodrama, Mizejewski has given us a
terrifically insightful and teachable book that helps us to appreciate The Americans as one of the most morally
complex and challenging of television dramas in recent memory."

With her nuanced analysis Mizejewski makes clear just what is so distinctive about The Americans: its fusing of
espionage and domestic melodrama, its involvement of children in espionage, and most of all its challenging
positioning of the series’ spectators in morally ambiguous and complex ways. A great book on a provocative and
innovative show.

The Americans is both gripping and groundbreaking, and there is no scholar more astute and no author more adroit
than Linda Mizejewski. Her writing is just as captivating as the show itself. This is no small achievement,
particularly because The Americans is smart and well written and requires that any scholar bring her ‘A game’ to its
consideration. Fortunately, Mizejewski’s work is always excellent. Indeed, Linda Mizejewki is one of the finest
writers publishing in gender and media analysis today, and it is a true pleasure to spend time with her and her
insights in this book.