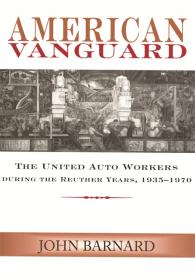 The struggles and victories of the UAW form an important chapter in the story of American democracy. American Vanguard is the first and only history of the union available for both general and academic audiences. In this thorough and engaging narrative, John Barnard not only records the controversial issues tackled by the UAW, but also lends them immediacy through details about the workers and their environments, the leaders and the challenges that they faced outside and inside the organization, and the vision that guided many of these activists.
Throughout, Barnard traces the UAW’s two-fold goal: to create an industrial democracy in the workplace and to pursue a social-democratic agenda in the interest of the public at large.

Part one explores the obstacles to the UAW’s organization, including tensions between militant reformers and workers who feared for their jobs; ideological differences; racial and ethnic issues; and public attitudes toward unions. By the outbreak of World War II, however, the union had succeeded in redistributing power on the shop floor in its members’ favor. Part two follows the union during Walter P. Reuther’s presidency (1946–1970). During this time, pioneering contracts brought a new standard of living and income security to the workers, while an effort was made to move America toward a social democracy—which met with mixed results during the civil rights decade. Throughout, Barnard presents balanced interpretations grounded in evidence, while setting the UAW within the context of the history of the U.S. auto industry and national politics.

John Barnard is professor of history emeritus at Oakland University. He is the author of several books, including Walter Reuther and the Rise of the Auto Workers (1983), and is an associate editor of Children and Youth in America: A Documentary History (1970–1974).

John Barnard's American Vanguard is the first comprehensive history of what was once America's most powerful and largest union, the United Auto Workers (UAW). Unlike other recent works, American Vanguard does not attempt to delve into the culture of the workers themselves. Barnard's descriptions of the internal political battles Reuther engaged in for control of the union are especially useful. Barnard is also careful to include the roles women and African Americans played in the UAW throughout history. American Vanguard is not only valuable to any historian studying American history but also offers valuable lessons to those concerned with the present state of the American labor movement.

John Barnard describes the UAW as an American vanguard at the forefront of efforts to humanize the workplace and fashion a social contract more favorable to working-class Americans. Exhaustively researched and crisply written, Barnard's book provides a thoughtful and often persuasive counterpoint to those scholars who have criticized the UAW but not fully appreciated the social and political constraints limiting its options. American Vanguard performs valuable service in spotlighting these achievements and reclaiming the UAW's important social legacy.

American Vanguard chronicles the history of this union with a style that combines scholarship with fine writing and a point of view that is sympathetic but not uncritical."

The greatest strength of Barnard's study is his massive research base. He makes extensive use of union archives and conducted interviews with a wide array of UAM leaders. He is especially effective in bringing home the extent of the struggle required to establish the union in the major automakers' plants. Barnard's work succeeds in its most basic goal of making readers appreciate the achievements of Reuther and other leaders who built and led the UAW through its greatest years. For scholars in Canada, where the field of institutional labour history remains underdeveloped, Barnard has provided another valuable service. He also shows just how much the field has to offer when served by a dedicated historian."

Written in clear and lively prose, American Vanguard is the only one-volume history of this important union. . . .the book is an effective blend of social and political history and an important and welcome addition to the literature on twentieth-century labor and politics."

John Barnard tackles the story of the UAW and its battles with the urgency of a reporter bringing us the news from the front lines of a war zone. From the Dirty Thirties through the grim years of World War II and the postwar era that followed, Barnard has you sitting on the edge of your seat because you're front and centre in this 607-paged epic tale illustrated with more than 70 black and white photographs. Not to be missed."

John Barnard's sweeping history of the UAW is both an impressive piece of scholarship-thoughtful, judicious, and gracefully written-and a fitting tribute to the extraordinary men and women who dared to dream of building a better America for working people. What a marvelous book!"

– Kevin Boyle, Ohio State University, author of The UAW and the Heyday of American Liberalism, 1945-1968

Barnard masterfully presents virtually every major development in the history of the union as a representative of auto workers in their dealings with the major automotive companies. This book is an appreciation for the benefits of younger generations for whom labor leadership is largely unknown and unimaginable.

John Barnard presents a comprehensive history of the initial thirty-five years of the UAW's innovative achievements in both the collective bargaining arena and in the national and international scene of socio-economic achievements-a history of interest to both unionists and non-unionists."