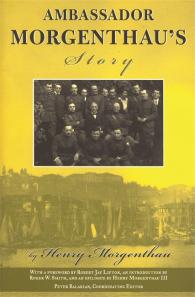 Originally published in 1918, Ambassador Morgenthau’s Story is one of the most insightful and compelling accounts of what became a recurring horror during the twentieth century: ethnic cleansing and genocide. While he served as the U.S. ambassador to the Ottoman Empire under Woodrow Wilson from 1913 to 1916, Henry Morgenthau witnessed the rise of a new nationalism in Turkey, one that declared "Turkey for the Turks." He grew alarmed as he received reports from missionaries and consuls in the interior of Turkey that described deportation and massacre of the Armenians. The ambassador beseeched the U.S. government to intervene, but it refrained, leaving Morgenthau without official leverage. His recourse was to appeal personally to the consciences of Ottoman rulers and their German allies; when that failed, he drew international media attention to the genocide and spearheaded private relief efforts.

"The power of Morgenthau’s book to move and instruct us eighty years after its publication," writes Roger Smith in his introduction, "is intimately connected with its truthfulness about the atrocities and the men behind them, but also about the capacities of humans to commit enormous evil with a light heart." The memoir also documents the beginnings of U.S. interest in international human rights as well as patterns and symptoms of genocidal tendencies, foreshadowing most notably the Nazi Holocaust.

Peter Balakian is the Donald M. and Constance H. Rebar Professor of the Humanities and a professor of English at Colgate University, where he was the first director of the Center for Ethics and World Societies. He is the author of the prize-winning memoir Black Dog of Fate.

Robert Jay Lifton, one of the most distinguished social critics and psycho-historians writing today and is Visiting Professor of Psychology at Harvard Medical School.

Roger W. Smith is a professor of Government at the College of William and Mary and is the president of the Association of Genocide Scholars of North America.

Henry Morgenthau III is a retired television producer and writer.

This new edition, edited by Peter Balakian, includes a foreword by the internationally acclaimed scholar Robert Jay Lifton, an introduction by genocide scholar Roger Smith, and an epilogue by Henry Morgenthau III, who reflects on his grandfather's life of philanthropic work as an international humanitarian diplomat. Morgenthau has also given to this edition previously unpublished photographs of his grandfathers years in Turkey- extraordinary images that bring the reader closer to this historic moment.

The power of the book to instruct us even now is intimately connected with not only its truthfulness about the atrocities and the men behind them, but also the story of how American and other diplomats, missionaries and relief workers did everything they could to end the slaughter and to care for the victims. One sees also the beginning of an American humanitarian outlook in the creation of an broad support for Near East Relief, which helped to save the lives of thousands of Armenians.

This book represents one of the central sources on the Armenian Genocide and remains to this day the primary American document on the event as authored by a U.S. official. It is in constant use as a reference and continues to serve as an introductory text to he global problem of genocide."