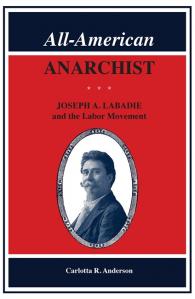 Joseph A. Labadie and the Labor Movement

All-American Anarchist chronicles the life and work of Joseph A. Labadie (1850—1933), Detroit's prominent labor organizer and one of early labor's most influential activists. A dynamic participant in the major social reform movements of the Gilded Age, Labadie was a central figure in the pervasive struggle for a new social order as the American Midwest underwent rapid industrialization at the end of the nineteenth century.

This engaging biography follows Labadie's colorful career from a childhood among a Pottawatomie tribe in the Michigan woods through his local and national involvement in a maze of late nineteenth-century labor and reform activities, including participation in the Socialist Labor party, Knights of Labor, Greenback movement, trades councils, typographical union, eight-hour-day campaigns, and the rise of the American Federation of Labor.

Although he received almost no formal education, Labadie was a critical thinker and writer, contributing a column titled "Cranky Notions" to Benjamin Tucker's Liberty, the most important journal of American anarchism. He interacted with such influential rebels and reformers as Eugene V. Debs, Emma Goldman, Henry George, Samuel Gompers, and Terence V. Powderly, and was also a poet of both protest and sentiment, composing more than five hundred poems between 1900 and 1920.

Affectionately known as Detroit's "Gentle Anarchist," Labadie's flamboyant and amiable personality counteracted his caustic writings, making him one of the city's most popular figures throughout his long life despite his dissident ideals. His individualistic anarchist philosophy was also balanced by his conventional personal life - he was married to a devout Catholic and even worked for the city's water commission to make ends meet.

In writing this biography of her grandfather, Carlotta R. Anderson consulted the renowned Labadie Collection at the University of Michigan, a unique collection of protest literature which extensively documents pivotal times in American labor history and radical history. She also had available a large collection of family scrapbooks, letters, photographs, and Labadie's personal account book. Including passages from Labadie's vast writings, poems, and letters, All-American Anarchist traces America's recurring anti-anarchist and anti-radical frenzy and repression, from the 1886 Haymarket bombing backlash to the Red Scares of the twentieth century.