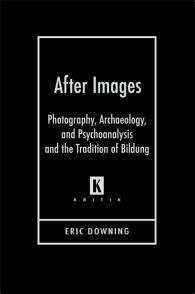 Photography, Archaeology, and Psychoanalysis and the Tradition of Bildung

After Images explores the intersections of photography, archaeology, and psychoanalysis and their effect on conceptions of the subject and his formation or Bildung in the literature and theory of the late nineteenth and early twentieth centuries. All three disciplines emerge out of the same historical context, and both photography and archaeology had major impacts on how psychoanalysis came to conceive of the subject, his memory, and the formation of his identity; and psychoanalysis had an equally major impact on how contemporary authors came to think about these same things. In After Images, Eric Downing examines works from Thomas Mann, Sigmund Freud, and Walter Benjamin to find evidence of the reconceiving and dismantling of the tradition of Bildung in literature of this historical period.

This volume begins by using the work of Bergson, Proust, Darwin, and others to elaborate a peculiarly modernist model of memory as a photographic plate and explores the ramifications of that model for the project of Bildung in Mann’s The Magic Mountain. The second section focuses on Freud’s reading, and the author’s own, of Wilhelm Jensen’s novella Gradiva, considering the effects of taking classical archaeology—a key institution in the official culture of Bildung and the formation of national German identity—as a model for the formation of individual psychological identity. The first two sections also consider the impact of the introjected field—photography and archaeology, respectively—on the conception of gender and sexuality at stake in Bildung. In the third section, the author examines Walter Benjamin’s Berlin Chronicle and its use of photography and archaeology to imagine both the process of memory and the project of analysis. The final section is an epilogue that considers the fate of these constellated themes in the postmodern works of W. G. Sebald, focusing on his novel Austerlitz.

The confrontation of photography, archaeology, and psychoanalysis with nineteenth-century ideals of the self led to many changes in contemporary literature. Scholars, students, and teachers of German studies, comparative literature, cultural studies, and classical studies will appreciate this insightful volume.

Eric Downing is professor of comparative literature and adjunct professor of classical studies at the University of North Carolina, Chapel Hill.

Bild and Bildung-image and self-formation-a topic so rich in the German tradition, especially in eighteenth-century writers like Wieland, Goethe, and Hölderlin--has now been brought up to date in Eric Downing's fascinating study. Downing is not only wonderfully thoughtful on Freud and Mann, Benjamin and Sebald; he is himself a writer on whom their examples have not been lost."

Through a series of richly interworked readings of texts by Thomas Mann, Freud, Benjamin, and Sebald, Eric Downing's fine book shows how the critical development of 'Bildung' in modernity is embedded in a constellation of disciplines old and new: archaeology, psychoanalysis, and photography, their origins and reproductions, images and after-images."

Downing's new study impresses with its immense erudition, graceful and unfailingly persuasive writing, and with the author's inexhaustible and infectious passion for his principal subjects, Thomas Mann, Sigmund Freud, and Walter Benjamin. Both on methodological grounds and by virtue of their singular perceptiveness, Downing's extended and fascinating explorations of The Magic Mountain, Gradiva (via Freud), and Berliner Chronik amount to an exceptional achievement; it also sets a new and impressive benchmark for contemporary German Studies."

The volume effortlessly contributes to the interdisciplinary field of German Studies, and its elegant and persuasive prose ensures a joyous reading experience for Germanists, classicists, and comparatists alike. Downing successfully takes up the immense task of weaving the visual, classical, and psychoanalytical together in this exploration of how classical Bildung (and its singular image or Bild) shifts to Entwicklung (a development with multiple facets and linguistic valences)."

Downing's penetrating analyses of exemplary modernist texts emphasize the shift in the imaginary that defines modernity: to photography, archaeology, and psycho?analysis. If realism associates truth and the visual, modernism forces us to question the superficiality of vision and the question the certainties of simple perception. Downing elucidates brilliantly how this shift in focus leads to the distortion and demise of Bildung under the pressure of twentieth-century practices."