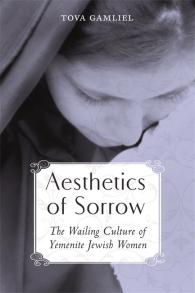 The term "wailing culture" includes an array of women’s behaviors and beliefs following the death of a member of their ethnic group and is typical of Jewish life in Yemeni culture. Central to the practice is wailing itself—a special artistic genre that combines speech with sobbing into moving lyrical poetry that explores the meaning of death and loss. In Aesthetics of Sorrow: The Wailing Culture of Yemenite Jewish Women, Tova Gamliel decodes the cultural and psychological meanings of this practice in an ethnography based on her anthropological research among Yemenite Jewish communities in Israel in 2001–2003.

Based on participant-observervation in homes of the bereaved and on twenty-four in-depth interviews with wailing women and men, Gamliel illuminates wailing culture level by level: by the circles in which the activity takes place; the special areas of endeavor that belong to women; and the broad social, historical, and religious context that surrounds these inner circles. She discusses the main themes that define the wailing culture (including the historical origins of women’s wailing generally and of Yemenite Jewish wailing in particular), the traits of wailing as an artistic genre, and the wailer as a symbolic type. She also explores the role of wailing in death rituals, as a therapeutic expertise endowed with unique affective mechanisms, as an erotic performance, as a livelihood, and as an indicator of the Jewish exile. In the end, she considers wailing at the intersection of tradition and modernity and examines the study of wailing as a genuine methodological challenge.

Gamliel brings a sensitive eye to the vanishing practice of wailing, which has been largely unexamined by scholars and may be unfamiliar to many outside of the Middle East. Her interdisciplinary perspective and her focus on a uniquely female immigrant cultural practice will make this study fascinating reading for scholars of anthropology, gender, folklore, psychology, performance, philosophy, and sociology.

Tova Gamliel is professor of anthropology at Bar-Ilan University, Israel. Her academic identity is that of an existential anthropologist. She is also the author of Old Age with a Gleam in the Eyes and End of Story: Meaning, Identity, Old Age.

Everything about this book is innovative. Tova Gamliel treats the poetic outpourings of the wailing women not as a survival from their Yemeni past but rather as a living cultural performance. She studies not only the wailing women but also their immediate and long-term impact on the bereaved families and their visitors. While her research tools are derived from anthropology, psychology, and performance studies, she fuses them into a single analytical scheme. And in spite of all the theoretical dilemmas, the study is written in fluent and non-technical language.

The author's participant observation fieldwork in Israel includes extensive interviews of 24 practitioners of this art. Drawing on the methods and theories of anthropology and psychology and with extensive documentation, Gamliel creatively develops a rather original theory to explain the particular practice among Jewish Yemenites and the reasons for its gradual demise. . . Of particular interest to scholars of mortuary practice, Middle Eastern and Jewish society, religion and gender, and, possibly, ethnomusicology.

This is a remarkable work—a scholarly and beautifully written study of the ‘wailing culture’ of Yemenite Jewish women in Israel. With strong command of a wide range of relevant literature, Tova Gamliel analyzes her rich ethnographic experiences from a variety of perspectives. Her coverage of the topic is exemplary, imaginative, and creative, within the tradition of postmodern interpretive ethnography. There are fine moments in the book, subtle and shrewd observations of discourse and behavior beautifully recounted and cleverly connected to social and psychological theory and generalizations. The book is a worthy addition to the growing literature on death rituals.

– Herbert S. Lewis, professor emeritus of anthropology at the University of Wisconsin–Madison and author of After the Eagles Landed: The Yemenites of Israel and In Defense of Anthropology: An Investigation of the Critique of Anthropology

The emotional weight that this subject involves can at times make the reading hard going, but Gamliel's careful exploration of the subject makes the challenge a worthwhile endeavor. Tightly situated within the theoretical material that considers other wailing cultures, acts of performance, and connection between mourning and cathartic expressions of grief, Gamliel's work offers a comprehensive and nuanced examination of the culture she explores. She also highlights the unusual nature of describing a culture removed from the society that produced it.