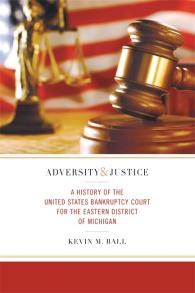 Bankruptcy law is a major part of the American legal landscape. More than a million individuals and thousands of businesses sought relief in the United States’ ninety-three bankruptcy courts in 2014, more than twenty-seven thousand of them in the Eastern District of Michigan. Important business of great consequence takes place in the courts, yet they ordinarily draw little public attention. In Adversity and Justice: A History of the United States Bankruptcy Court for the Eastern District of Michigan, Kevin Ball takes a closer look at the history and evolution of this court.

Using a variety of sources from newspaper accounts and interviews to personal documentation from key people throughout the court’s history, Ball explores not only the history of the court from its beginning in the late nineteenth century but also two major courthouse scandals and their significant and long-lasting effects on the court. The first, in 1919, resulted in the removal of a court referee for a series of small infractions. The second was far more serious and resulted in the resignation of a judge and criminal convictions of the court’s chief clerk, one of his deputies, and one of Detroit’s most prominent lawyers.

The book culminates with a comprehensive account of the city of Detroit’s own bankruptcy case that was filed in 2013. Drawing on the author’s expertise as both a longtime bankruptcy attorney and a political scientist, the book examines this landmark case in its legal, social, historical, and political contexts. Anyone with an interest in bankruptcy, legal history, or the city of Detroit’s bankruptcy case will be attracted to this thorough case study of this court.

Kevin Ball received both his law degree and his Ph.D. from Wayne State University in Detroit, Michigan. A longtime bankruptcy attorney before embarking on a career in higher education, he is currently the director of paralegal and business programs at Baker College.

Kevin Ball's Adversity and Justice is a fascinating case study of bankruptcy in America through the perfect lens of the Eastern District of Michigan. Ball deftly traces the important, colorful, and sometimes tragic people and cases that make this book a must-read for anyone who toils in or cares about the history, economics, or politics of success and failure.

Kevin Ball's painstaking historical analysis of what might seem like a sleepy historical backwater of the judiciary is actually a remarkably engrossing tale of the development of the bankruptcy system in this country. Resurrecting forgotten heroes — and scoundrels — is as illuminating as it is interesting.

Professor Ball has penetrated the complexity and mystery of bankruptcy to produce an outstandingly readable history of the development and practice of bankruptcy law in the United States and in the courts of the Eastern District of Michigan. This seminal history will be valuable to scholars and the general public alike, especially the exhaustive treatment of the recent landmark bankruptcy of the city of Detroit.

Adversity and Justice historically visits the United States Bankruptcy Court for the Eastern District of Michigan from the nascent Bankruptcy Act of 1898, when referees were mere legal assistants to the district court, to the time when the bankruptcy judges became independent and efficiently handled one of the largest and most demanding case dockets in the country. Professor Ball delves into the dark days of the cases assignment scandal, the subsequent redemption of the court, and the success of the largest chapter 9 municipal reorganization in history. This carefully researched and well-written book is not to be missed.

Ball deserves credit for writing a comprehensive and balanced history of the U.S. Bankruptcy Court for the Eastern District of Michigan, one that should be on the shelves of lawyers—bankruptcy attorneys or otherwise—who love history, particularly the history of a significant eastern Michigan institution whose story has not previously been told.