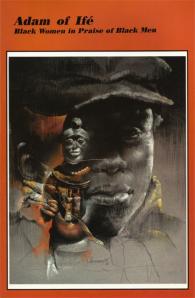 This ground-breaking anthology of poetry contains an informative foreword by the editor, Naomi Long Madgett, which traces the historical influences that have cast so many contemporary African American men in a negative light.

The book is divided into eight sections: "Fathers," "Brothers, Sons and Other Youth," "Lovers," "Street Scene," "Beacons," "Music-Makers," "In Light and Shadow," and "In This Sad Place." Each of these section titles is preceded by a group of four portraits drawn by the late Carl Owens.

This is an extremely important book that educates its readers, portraying African American men in many positive ways and denying the stereotypical images that too often prevail. The message is not overshadowed by the fine literary quality of the poems by 55 African American women. The title refers to Ifé, a city in Nigeria which, according to legend, was the birthplace of mankind.

Naomi Long Madgett grew up in East Orange, NJ, St. Louis, MO, and New Rochelle, NY. She has been a resident of Detroit, MI since 1946. She earned her B.A. from Virginia State University (1945), her M.Ed. from Wayne State University, and her Ph.D. from the International Institute for Advanced Studies (1981). She is the author of ten books of poetry, the first published when she was seventeen years old, two textbooks, and an autobiography and editor of two anthologies. She is also the founder and publisher/editor of Lotus Press, Inc., established in 1972. Since 2001 she has been Poet Laureate of the City of Detroit. She is also Professor of English Emeritus at Eastern Michigan University.

Illustrator Carl Owens began his career as a portrait artist but later broadened out to include the diversity of African and African American culture, demonstrating a variety of styles and scenes. His many highly acclaimed works include the, "Great Kings of Africa" series and "Images of the African Diaspora."