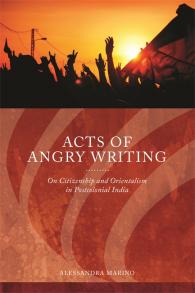 On Citizenship and Orientalism in Postcolonial India

From Aristotle to Seneca, ancient philosophers considered anger to be aggressive and incompatible with rational conduct, and later thinkers associated this "illogical" emotion with femininity and its flaws. In Acts of Angry Writing: On Citizenship and Orientalism in Postcolonial India, author Alessandra Marino looks at anger differently, as an essential condition for writing in contexts of struggle. Analyzing the activist literature and autobiographical writings of Indian writers Mahasweta Devi, Arundhati Roy, and Sampat Pal, Marino sheds light on anger as a trigger for the political writing where struggles for the basic rights of indigenous people and lower castes are fought.

Acts of Angry Writing is divided into four parts. In the first two, Marino focuses on Roy and Devi to analyze the relation between the authors’ works and some of the most famous actions of social protest in which they have been involved. In the third part, Marino examines the representation of anger as a productive emotion in Warrior in a Pink Sari, the autobiography of Sampat Pal, a telling example of the close relation between literature, social reality, and ongoing political debates.Marino concludes by reflecting on the link between an ethical call that initiates acts of social protest and the writing related to active citizenship movements in contemporary rural India.

Acts of Angry Writing will be informative reading for scholars in a range of fields, from cultural and postcolonial studies to gender studies, South Asian studies, and citizenship studies. Its rich discussion of performativity and speech acts theory bridges the gap between the fields of literary theory, law, and citizenship.

Alessandra Marino is postdoctoral researcher at The Open University (UK). She has published articles in Third Text and the Journal of Postcolonial Writing, among other journals, and co-edited the book Shakespeare in India.

Acts of Angry Writing is a rich interpretation of the struggles of Adivasi people in India to claims of citizenship. By skillfully blending literature, law, and political theory into a compelling narrative, Alessandra Marino reads the writings of Mahasweta Devi, Arundhati Roy, and Sampat Pal as acts because they do not simply describe but enjoin the struggles of Adivasi people. This book is a major contribution to indigeneity, politics, and citizenship with an innovative approach using theories of performativity, speech acts, and affect.

Mahasweta Devi, Arundhati Roy, Sampat Pal are three Indian women who conjoin political activism and writing. Alessandra Marino’s book reads this link through the prism of (post)colonial subalternity and marginalization. Drawing on an extensive bibliography and her own experience of Indian movements and struggles, the author considers such ‘acts of writing’ as means of resistance as well as a bridge between ethics and aesthetics. These critical reflections on writing as a bodily art and on the writing self make an important contribution to contemporary postcolonial and feminist research.

When literature, sourced by the anger induced by modern neoliberalism, dispossession, and injustice, transgresses the established limits of the law it performs of citizenship to come. We find ourselves reaching beyond present political rationalisms that render all transparent to the intentions of Occidental modernity. Listening in India to the injured of the world, registering the attempted effacement of women, tribal and rural lives from the national narrative, this inspiring volume reworks the very sense of the political in an important contribution to an emerging global argument.

This book is an original and forceful read that takes the role of resistance literature or literature engagé to a higher plane. Acts of Angry Writing become an enactment of political struggle, which leads to social justice and more inclusive forms of citizenship. By focusing on major Indian activist writers, this enthralling book captures the huge complexities and disparities of India by foregrounding literature as an agent that can mobilize anger, affect, and rights. Literature becomes a battlefield where language strikes back.