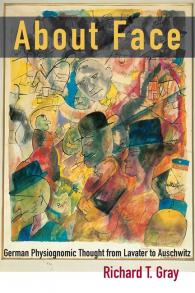 Gray succeeds admirably in establishing one of his main points, which is that physiognomy was not a completely innocent intellectual tradition...

Once associated with astrology and occultist prophecy, the art of interpreting personal character based on facial and other physical features dates back to antiquity. About Face tells the intriguing story of how physiognomics became particularly popular during the Enlightenment, no longer as a mere parlor game but as an empirically grounded discipline. The story expands to illuminate an entire tradition within German culture, stretching from Goethe to the rise of Nazism.

In About Face, Richard T. Gray explores the dialectical reversal—from the occult to the scientific realm—that entered physiognomic thought in the late eighteenth century, beginning with the positivistic writings of the Swiss pastor Johann Caspar Lavater. Originally claimed to promote understanding and love, physiognomics devolved into a system aimed at valorizing a specific set of physical, moral, and emotional traits and stamping everything else as "deviant." This development not only reinforced racial, national, and characterological prejudices, but lent such beliefs a presumably scientific grounding.

In the period following World War I, physiognomics experienced yet another, unprecedented boom in popularity. Gray explains how physiognomics had by then become a highly respected "super-discipline" that embraced many prominent strands of German thought: the Romantic philosophy of nature, the "life philosophy" propagated by Dilthey and Nietzsche, the cultural pessimism of Schopenhauer, Husserl’s method of intuitive observation, Freudian psychoanalysis, and early-twentieth-century eugenics and racial biology. A rich exploration of German culture, About Face offers fresh insight into the intellectual climate that allowed the dangerous thinking of National Socialism to take hold.

Richard T. Gray is the Byron W. and Alice L. Lockwood Professor in the Humanities at the University of Washington. He teaches in the Department of Germanics.

The book's many accomplishments are clear, and its harsh response to Lavater is deserved and overdue. A milestone in our understanding of the intersection of racism and physiognomic thought in Germany, About Face offers an excellent gateway to Lavater's philosophical roots as well as a rich account of the irrational and dangerous side of physiognomics."

This is a handsomely produced and richly illustrated book without a single typo on over 500 pages, which in itself is a welcome rarity in times of cheap, instant, academic publishing. In the finest tradition of writing a history of ideas, Gray traces the developments of such early physiognomic approaches in the works of Schopenhauer, Ludwig Klages, Rudolph Kassner, and Oswald Spengler, among others, right down to Husserl's phenomenology, thereby revealing plenty of correspondences and mutual dependencies between the various thinkers."

Richard T. Gray's study of German theories of physiognomy is by far the most comprehensive such work ever written-in any language. Exploring the theoretical and applied views from the father of modern physiognomy Lavater in the 18th century to the Nazis, Gray illustrates the development of the claims that surface appearance reflects underlying meanings. This assumption haunts German (and through them European) consciousness for more than a century. A brilliant, well-written book that is important to historians of science as well as to historians of literature."

Gray's impressive analysis of an intellectual tradition that influenced Nazi racial theory contributes to the discussion over the role of materialism in the construction of racial ideologies in general and Nazi racial theories in particular. Gray succeeds admirably in establishing one of his main points, which is that physiognomy was not a completely innocent intellectual tradition that was hijacked by Günther and other Nazi racists, but that from the start it contained elements amenable to Nazi racism.

About Face is an innovative account of the origins of Nazi racial theories. Drawing on his magisterial command of German intellectual history, Gray explores the tradition of physiognomy, the strange belief that one's body and face reveal the content of one's character. This book is indispensable for understanding race today as much as during the Holocaust."

In sum, this book is substantial and wide-ranging. Indeed, it is thoughtful,thorough, and admirable accomplishment.

About Face is by far the most comprehensive English-language work on German physiognomic tradition. It promises to become mandatory reading for anyone interested in physiognomy's broader influence on German intellectual history. Given the tragic outcome of its influences, that audience promises to be a large one indeed."