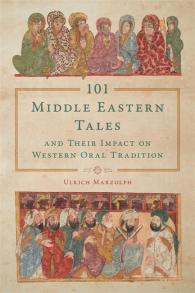 101 Middle Eastern Tales and Their Impact on Western Oral Tradition

Against the methodological backdrop of historical and comparative folk narrative research, 101 Middle Eastern Tales and Their Impact on Western Oral Tradition surveys the history, dissemination, and characteristics of over one hundred narratives transmitted to Western tradition from or by the Middle Eastern Muslim literatures (i.e., authored written works in Arabic, Persian, and Ottoman Turkish). For a tale to be included, Ulrich Marzolph considered two criteria: that the tale originates from or at least was transmitted by a Middle Eastern source, and that it was recorded from a Western narrator’s oral performance in the course of the nineteenth or twentieth century. The rationale behind these restrictive definitions is predicated on Marzolph’s main concern with the long-lasting effect that some of the "Oriental" narratives exercised in Western popular tradition—those tales that have withstood the test of time.

Marzolph focuses on the originally "Oriental" tales that became part and parcel of modern Western oral tradition. Since antiquity, the "Orient" constitutes the quintessential Other vis-à-vis the European cultures. While delineation against this Other served to define and reassure the Self, the "Orient" also constituted a constant source of fascination, attraction, and inspiration. Through oral retellings, numerous tales from Muslim tradition became an integral part of European oral and written tradition in the form of learned treatises, medieval sermons, late medieval fabliaux, early modern chapbooks, contemporary magazines, and more. In present times, when national narcissisms often acquire the status of strongholds delineating the Us against the Other, it is imperative to distinguish, document, visualize, and discuss the extent to which the West is not only indebted to the Muslim world but also shares common features with Muslim narrative tradition. 101 Middle Eastern Tales and Their Impact on Western Oral Tradition is an important contribution to this debate and a vital work for scholars, students, and readers of folklore and fairy tales.

Ulrich Marzolph is a retired professor of Islamic Studies at the Georg-August-University in Göttingen, Germany. His field of expertise is the narrative culture of the Muslim world. His most recent book is Relief after Hardship: The Ottoman Turkish Model for the Thousand and One Days (Wayne State University Press, 2017).

From Belling the Cat to A Pound of Flesh, an absolute master of comparative folklore identifies the Middle Eastern narratives that have entered the Western oral tradition in the past millennium. Ulrich Marzolph’s mastery of classical Persian, Arabic, and Ottoman Turkish sources shines through this volume and will engage the expert and entertain the lay reader.

– Mahmoud Omidsalar, consulting editor in folklore for the Encyclopaedia Iranica and resident scholar at Dr. Samuel M. Jordan Center for Persian Studies at the University of California, Irvine

– Hasan El-Shamy, professor emeritus in the Departments of Folklore and Ethnomusicology and Near Eastern Languages and Cultures, Indiana University, Bloomington

This book is an endlessly fascinating ‘story of our stories,’ tracing the resonant linkage between individual tales preserved in Middle Eastern literary traditions and their later lives, as they were transmitted to the West and then circulated orally across Europe and beyond. Marzolph’s erudition and appetite for literary treasure hunts are unsurpassed.

Marzolph is one of the leaders in this area of folklore studies and his vast knowledge and experience shows. Overall, this is highly recommended and filled a gap in my extensive folklore library.

This is a book of impeccable scholarship and vast learning and at the same time a wonderful treasure trove to dip into at random. It is also a useful reminder that it is misguided to believe that collecting popular tales in one language or country can serve to prove the existence of a national identity or nationhood.

The interpretive essays reveal both the depth and the breadth of Marzolph’s scholarship. His unique ability to illuminate parallels as well as distinctions between the cultures of the Middle East and those of Europe as reflected in their oral traditions ensure this book’s future as a standard reference tool.

5 hours 28 min ago
Happy Pub Date! HOUSE AND HOME is a collection of poems that intensely explore the beauty & wisdom to be found in w… https://t.co/MYnkKJxcrx
2 days 7 hours ago
Join WSU President M. Roy Wilson for a book talk next Wednesday! Copies of his memoir will be available for sale a… https://t.co/6q5w5dtFtu
4 days 7 hours ago
TONIGHT! Join @stephanie_heit at @ShopBooksweet for local author's night! https://t.co/pTny5OErDe